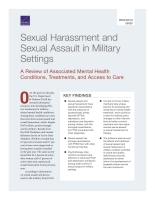 A Review of Associated Mental Health Conditions, Treatments, and Access to Care

Over the past two decades, the U.S. Department of Defense (DoD) has invested substantial resources into developing effective treatments for military-related mental health conditions. Among those conditions are ones that arise from sexual assault and sexual harassment, which, despite DoD's efforts, persist throughout the military. Results from the 2018 Workplace and Gender Relations Survey of Active Duty Members (WGRA) revealed that 6.2 percent of women and 0.7 percent of men were categorized as having been sexually assaulted in the past year. The same survey found that 24.2 percent of active-duty women and 6.3 percent of active-duty men experienced sexual harassment in the previous year.

According to information on sexual assault and harassment in the military from DoD's Psychological Health Center of Excellence (PHCoE), victims of sexual assault and sexual harassment often experience a variety of psychological disorders. Sexual trauma also might affect careers. Consistent with past studies, a 2021 RAND report on findings from the 2014 RAND Military Workplace Study found that the probability that a service member leaves the military rises dramatically after they have been sexually assaulted. Despite a need to address these harms, some service members have reported in such surveys as the 2018 WGRA that connecting to health care or mental health services following sexual assault or sexual harassment can be difficult—in part because of a lack of leadership support.

Given these persistent challenges, PHCoE identified an urgent need to better understand research that is pertinent to sexual assault and sexual harassment during military service so that the department and the military services could improve the health care response for service members. PHCoE turned to RAND's National Defense Research Institute to investigate and synthesize the relevant research in the following three topic areas:

RAND researchers employed comprehensive searches and reviews of the evidence base using a standardized and internationally recognized set of methods to promote transparency and consistency. These reviews provided a point-in-time examination across the continuum of care—from outcomes of the sexual assault or sexual harassment experience, to the effectiveness of treatment, and, finally, to barriers to care and retention. This research brief summarizes the findings from these reviews.

In the first review, which included 43 studies, researchers investigated potential associations between sexual assault or sexual harassment experienced as an adult and three mental health conditions: PTSD, depression, and substance use disorders. The results of the review indicated evidence of moderate to strong associations between reported experiences of sexual assault or sexual harassment and the likelihood of PTSD, depression, and substance use disorders among adults over 18 years of age.

These findings emphasize the strong link between specific mental health conditions—particularly PTSD—and experiences of sexual assault and/or sexual harassment among adults. The prevalence of sexual assault and sexual harassment within the military points to a need for treatment programs and other supports that are tailored to service members who experience these sexual traumas.

Treatments are available to reduce symptoms of PTSD, depression, substance use disorder, and other psychological outcomes resulting from sexual assault and/or sexual harassment. Research over the past ten years on the effectiveness of psychotherapy interventions designed for sexual assault victims in the military shows promising results. This review focused on sexual assault because none of the ten studies identified examined the effect of psychological interventions on victims of sexual harassment.

A review of ten studies, including uncontrolled before-and-after studies and randomized control trials, showed the effectiveness of psychotherapy interventions in reducing PTSD and depression symptoms among veterans who experienced sexual assault in a military setting. This finding applied to a variety of psychotherapy treatment options, including therapies that involve revisiting memories of a specific traumatic event (trauma-focused therapy), therapies that help victims develop coping skills (skills-based therapy), generic therapies that typically are used as controls in experiments, and therapies that combine several methods. The researchers did not detect any differences in treatment effects among treatment types or between men and women. These results suggest that a variety of psychotherapies might be effective in improving mental health outcomes.

Research examined in this review showed that trauma-focused therapies—for PTSD and depression in particular—were effective among veterans who experienced sexual assault in a military setting, which is consistent with the current body of evidence for victims of sexual assault with PTSD in the broader civilian population. These results support the strong recommendation within the U.S. Department of Veterans Affairs and DoD for use of these types of therapies.

Skills-based therapies also showed effectiveness for PTSD and depression, although the evidence is weaker. This finding might be noteworthy because of the attrition, particularly among women, that is associated with the difficulty of revisiting trauma in trauma-focused therapies. Effective therapies that take different approaches would offer a broader set of therapies to match treatment preferences, potentially reducing attrition.

Given that effective treatments are available, victims of sexual assault and/or sexual harassment might need to be connected to mental health services and remain engaged in care to gain the benefits of treatment. However, knowledge of barriers and facilitators for members of the military is limited. Across 17 studies, researchers identified a variety of factors that can affect access to treatment as reported by current and former members of the military who have experienced sexual assault and/or sexual harassment. These factors fall into four groups: the overall health system, treatment programs, providers, and the individuals themselves.

According to the research, distrust in the health system, prior negative experiences, and the perception that the predominantly male culture of military settings is unwelcoming to women were barriers to accessing and remaining in care. In addition, concerns were reported about the confidentiality of military health records, how the information might be used, and whether it could have a negative impact on a service member's career.

The research related to interventions focused on the impact of certain treatment characteristics on access and retention among individuals who reported experiencing military sexual trauma. For example, one study suggested that retention might be higher when care can be delivered in a way that is in line with patient preferences—regardless of whether it is conducted in person or via telehealth and regardless of the type of psychotherapy. Another study suggested that certain types of therapy (e.g., psychotherapy) might be more likely to be used by military sexual trauma victims.

The role or impact of providers also emerged as a factor affecting access and retention. Developing a trusting relationship with providers was important to both accessing and remaining in care, with individuals expressing concerns about the sensitivity, compassion, and reactions of providers. Having to change providers after establishing a relationship with them was also cited as a deterrent to remaining in care, which emphasizes the importance of the continuity of care. Finally, both men and women who seek treatment for sexual trauma indicated preferences for female providers.

Factors affecting care access and retention at the individual level were frequently studied. Perceptions about stigma and shame among victims of sexual assault and sexual harassment and concerns about how victims might be viewed by coworkers, leaders, or even providers were commonly reported. Studies also reported that individuals felt that they would not be believed when sharing experiences of sexual assault or trauma, that there was a perception that military sexual trauma does not affect men, and that their trauma was not serious enough or important enough to warrant treatment.

The research revealed that some individuals were not aware of available military services for sexual assault or sexual harassment or were concerned about issues with insurance coverage. Logistical barriers to both access and retention were also stressed, including issues with scheduling appointments, getting time off work, inadequate transportation, and challenges arranging child care.

Although some of the barriers and facilitators identified in this review overlap with factors affecting individuals who might have experienced sexual assault or harassment in civilian settings, some unique barriers point to a need to consider specific policy changes or other interventions (e.g., educational or outreach materials) to better meet the needs of military members who have experienced sexual assault or sexual harassment.

The analysis conducted in these evidence reviews was constrained because of shortcomings in the literature, including low overall research quality; a limited number of studies; differences in definitions, design, and populations across studies; few randomized controlled trials; and measurement challenges, all of which can reduce the strength of the findings. In addition to a need for a more robust body of evidence, the reviews revealed several research gaps that should be addressed to better inform future practice for current and former service members who have experienced sexual assault or sexual harassment. These research gaps include the needs

Despite the limitations, the findings from these reviews contribute to the overall evidence base regarding psychological outcomes and mental health conditions for individuals who experienced sexual assault and sexual harassment victimization as adults, associated treatment outcomes, and barriers and facilitators to accessing and staying in care for current and former service members.