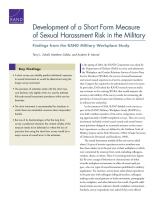 In 2014, RAND developed a new version of the survey used by the U.S. Department of Defense (DoD) to estimate the prevalence of sexual assault and sexual harassment. More than 115,000 active-component members completed that survey in the summer of 2014. Subsequently, the Sexual Assault Prevention and Response Office in the Office of the Secretary of Defense asked RAND whether a short version of the sexual harassment measure in the new survey could be developed for use in the Organizational Climate Surveys fielded by the Defense Equal Opportunity Management Institute. Whereas the sexual harassment instrument in the survey RAND developed required up to 52 questions to establish whether a service member experienced sexual harassment as defined in DoD regulations, in this short report the authors document a five-question measure that reliably predicts scores on the longer instrument. The five-item sexual harassment survey seems to be appropriate for use in military organizational climate surveys. The current report documents the suggested scoring of the short form instrument and demonstrates the close association between the short and full instruments when used to assess sexual harassment at either the individual or organizational level.