The Pennsylvania Legislative Budget and Finance Committee, a committee of the Pennsylvania General Assembly, sponsored a RAND Corporation study to identify options that would improve the long-term sustainability and viability of the universities in the Pennsylvania State System of Higher Education in the coming years. This report outlines the five alternatives that RAND researchers developed. 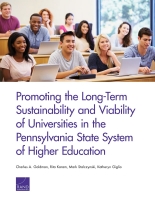 Challenges will continue to affect universities and students.

Instead of university closures, there are five possible options for change.

The research described in this report was funded by the Pennsylvania General Assembly's Legislative Finance and Budget Committee and conducted by RAND Education.