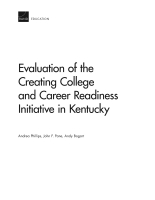 Evaluation of the Creating College and Career Readiness Initiative in Kentucky

The Kentucky Valley Educational Cooperative and Green River Regional Educational Cooperative received an Investing in Innovation (i3) development grant from the U.S. Department of Education to implement the Creating College and Career Readiness (C3R) initiative. The initiative offered a suite of software developed by WIN Learning (WIN) to support college and career readiness (CCR) among students in grades 8 through 12. The software suite was originally created for adults in workforce development programs and, in 2011, C3R was the first implementation of the suite in the kindergarten–12th grade context.

This report presents findings from the evaluation of C3R. One hundred twenty-seven schools, including technical schools and area technical centers, implemented the C3R initiative with students in grades 8 to 12 from the 2013–2014 to 2016–2017 school years. The initiative involved the implementation of three software applications that aimed to prepare students for life after high school.

The research described in this report was sponsored by the Kentucky Valley Educational Cooperative and conducted by RAND Education.