The authors develop a framework of 17 indicators to assess valuable attributes of potential host nations from Beijing's perspective, focusing not only on the utility of host nations (desirability) but also on China's ability to secure access (feasibility). They recommend strategies for the U.S. government, the U.S. Department of Defense, and the U.S. Army to better understand China's overseas plans and to prioritize risks to U.S. forces. 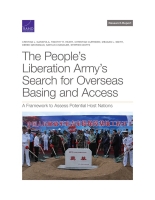 The People's Liberation Army's Search for Overseas Basing and Access

While China's growing economic power began reshaping the global economy in the 2000s and Beijing's foreign policy approach has increasingly sought to reshape the international order since the 2010s, the future role of China's rapidly improving military, the People's Liberation Army (PLA), on the global stage remains unclear. However, General Secretary Xi Jinping's 2017 assertion that the PLA will transform into “world-class forces” by 2049 implies that China will seek to develop at least some level of global military power over the next three decades.

This study aims to understand where China might seek to gain basing and access for PLA forces abroad and what types of operations it might carry out there. The authors develop a framework to systematically assess valuable attributes from Beijing's perspective, focusing on the utility of potential host nations (desirability) and on China's ability to secure access (feasibility). They evaluate 108 countries across three priority regions — the Middle East, Africa, and the broader Indo-Pacific — and the respective U.S. combatant command areas of responsibility in which each country is located.

The authors match 17 framework indicators, focusing on the 2030–2040 time frame, to available quantitative and qualitative data to assess and rank potential host nations. They discuss implications and recommend strategies for the U.S. government, the U.S. Department of Defense, and the U.S. Army to better understand China's plans for additional overseas basing and access and to prioritize risks to U.S. forces.

A growing overseas PLA presence is not a matter of if, but when

The research described in this report was sponsored by U.S. Army Pacific and conducted by the Strategy, Doctrine, and Resources Program with the RAND Arroyo Center.