Overseas military access and basing is a critical component of China's global military ambitions. In this report, the authors examine three case studies among the United States' competitors to help anticipate what Chinese overseas access and basing might look like in the 2030s. They assess the risks posed by Chinese military expansion and recommend U.S. strategies to help shape the environment in which Chinese global ambitions will unfold. 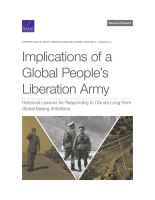 In this report, the authors look to the past to help anticipate what Chinese overseas access and basing might look like in the 2030s. They focus on three case studies of overseas military access and basing among the United States' competitors — French bases in francophone Africa during De Gaulle's presidency, Soviet bases ringing the Mediterranean and Red Seas region under Brezhnev, and Russian bases in Syria during the ongoing Syrian civil war — to understand how major powers have conceived of and used strategic basing in the past.

France, the Soviet Union, and Russia — together with the United States (also examined) — have had the largest networks of overseas military bases in the post–World War II period. These cases represent a range of competitive behaviors, reflecting the uncertainty of Chinese behavior ten to 20 years in the future. Drawing on a combined examination of case studies and a literature review of U.S. basing experiences, the authors assess the potential risks posed by Chinese military expansion and recommend principles for the U.S. government, U.S. Department of Defense, and U.S. Army to adopt now to help shape the environment in which Chinese ambitions for global military presence will unfold.

For a country that seeks to compete against the United States, bases provide some level of military potential that likely could not be realized through lesser forms of access

Recommendations for the U.S. government

Recommendations for the U.S. Department of Defense and U.S. Army

The research described in this report was sponsored by U.S. Army Pacific and conducted by the Strategy, Doctrine, and Resources Program with the RAND Arroyo Center.