U.S. decisionmakers and a variety of analysts have generally agreed that broad-based, inclusive governance and institutionalized capacity-building consistent with the rule of law are the long-term goals for stabilizing fragile states. How to realize these goals is much more contentious. This report summarizes research on better understanding the use of leverage in nudging partners toward better governance practices after military interventions. 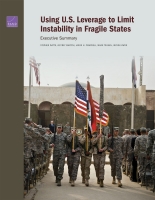 The U.S. experiences in Iraq and Afghanistan and the resulting U.S. military doctrine emphasize the need for the United States to consolidate the gains it has realized on the battlefield. Recognizing this need, however, is much easier than understanding the measures necessary to succeed. Both U.S. decisionmakers and a variety of analysts have generally agreed that broad-based, inclusive governance and institutionalized capacity-building consistent with the rule of law are the long-term goals for stabilizing fragile states. The conditions under which these goals are realistic and how to realize them are much more contentious. This report summarizes research intended to advance at least partial answers to these questions, including a framework to help better understand when we expect U.S. leverage to be successful in nudging partners toward better governance practices. While there is no panacea for the difficulties of stabilizing countries after conflicts, this research offers guidance on how the United States might improve the odds of securing such hard-won gains and evidence to suggest that — at least under the right circumstances — it can do so.

The research described in this report was sponsored by the Office of the Deputy Chief of Staff, G-3/5/7, U. S. Army and conducted by the Strategy, Doctrine, and Resources Program within the RAND Arroyo Center.