As programs grow larger and the interdependencies of the program activities get complex, tools are needed to introduce more rigor into program management to reduce schedule risk. The authors of this report describe novel methods delivered to the Ground Based Strategic Deterrent program office to reduce the likelihood of rework in program execution and provide insights into schedule risk and how to restructure task dependencies to manage risk. 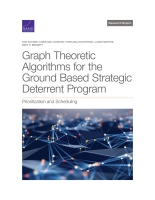 Graph Theoretic Algorithms for the Ground Based Strategic Deterrent Program

During the execution of programs, managers must orchestrate the planning and performance of upwards of tens of thousands of interdependent tasks. Many of these tasks have interdependencies such that failure to meet scheduling expectations in one task can affect the execution of many others. As programs grow larger and the interdependencies of the program activities get complex, tools are needed to introduce more rigor into program management to reduce schedule risk.

The Ground Based Strategic Deterrent (GBSD) currently under development — a complete replacement for the aging LGM-30 Minuteman III intercontinental ballistic missile system — is a good example of a large, complex program with numerous interdependent tasks. Given the tight schedule by which GBSD is bound and the numerous organizations participating, it is necessary that the required certification process for nuclear systems proceeds in an efficient manner. In this report, the authors present the underlying rationale behind algorithms already delivered to the GBSD program office that were designed to reduce the likelihood of rework in program execution, provide better insight into schedule risk, and provide insights into how to restructure task dependencies to manage schedule risk. Although the novel methods described in this report were developed for the GBSD program, they are general and can be applied to any program.

The research described in this report was commissioned by the Commander of the Nuclear Weapons Center and Program Executive Officer for Strategic Systems and conducted by the Force Modernization and Employment Program within RAND Project AIR FORCE.