This report examines how and why China uses gray zone tactics—coercive activities beyond normal diplomacy and trade but below the use of kinetic military force—against five U.S. allies and partners in the Indo-Pacific and seeks to identify the most problematic tactics that the United States could prioritize countering. 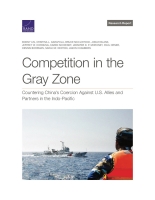 Competition in the Gray Zone

Countering China's Coercion Against U.S. Allies and Partners in the Indo-Pacific

Few studies have systematically tracked how China is using gray zone tactics—coercive activities beyond normal diplomacy and trade but below the use of kinetic military force—against multiple U.S. allies and partners. Lacking a foundational empirical baseline, it is difficult to determine patterns and trends in Chinese activities to develop effective counters to them. The authors developed a framework to categorize China's use of gray zone tactics against five U.S. allies and partners in the Indo-Pacific and to identify the most problematic People's Republic of China (PRC) tactics that the United States could prioritize countering. Based on open-source material, this report provides a more in-depth understanding of Chinese operations in the gray zone. Among other conclusions, the authors observe that China views gray zone activities as natural extensions of how countries exercise power. China employs such tactics to balance maintaining a stable, favorable external environment with efforts to alter the status quo in China's favor without triggering major pushback or conflict. It has used nearly 80 such tactics on its neighbors, often in relation to territorial disputes.

The research reported here was commissioned by Pacific Air Forces and conducted within the Strategy and Doctrine Program of RAND Project AIR FORCE.