International mobility is important for the UK and UK researchers 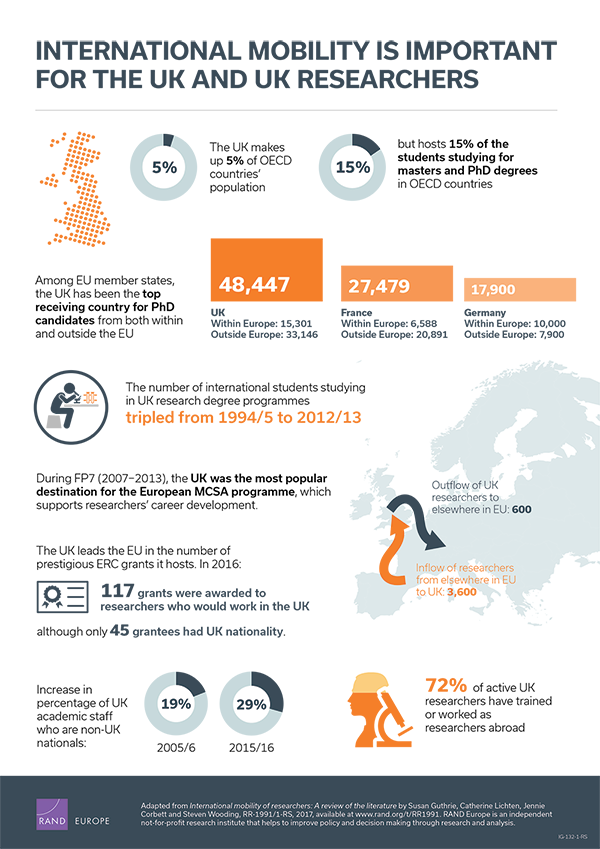 International Mobility Is Important for the UK and UK Researchers

Among EU member states, the UK has been the top receiving country for PhD candidates from both within and outside the EU

During FP7 (2007-2013), the UK was the most popular destination for the European MCSA programme, which supports researchers' career development.

Outflow of UK researchers to elsewhere in EU: 600

Inflow of researchers from elsewhere in EU to UK: 3,600

The UK leads the EU in the number of prestigious ERC grants it hosts. In 2016: 117 grants were awarded to researchers who would work in the UK although only 45 grantees had UK nationality.

Increase in percentage of UK academic staff who are non-UK nationals:

Adapted from International mobility of researchers: A review of the literature by Susan Guthrie, Catherine Lichten, Jennie Corbett and Steven Wooding, RR-1991/1-RS, 2017, available at https://www.rand.org/pubs/research_reports/RR1991.html.

RAND Europe is an independent not-for-profit research institute that helps to improve policy and decision making through research and analysis.