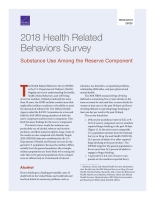 Substance Use Among the Reserve Component

This brief reviews results for substance use, particularly use of alcohol, tobacco and nicotine products, and illicit and prescription drugs. Some of the results are also compared with Healthy People 2020 (HP2020) objectives established by the U.S. Department of Health and Human Services for the general U.S. population. Because the military differs notably from the general population (for example, military populations are more likely to be young and male than is the general population), these comparisons are offered only as a benchmark of interest.

Heavy drinking is a leading preventable cause of death both in the United States and worldwide and has been linked to numerous problems, such as substance use disorders, occupational problems, relationship difficulties, and poor physical and mental health.

The survey found that

The 2018 HRBS asked reservists about their perception of military alcohol culture—that is, whether respondents found it hard to "fit in" with their command if they did not drink, believed that drinking is part of being in one's unit, believed that everyone is encouraged to drink at social events, or believed that leaders are tolerant of drunkenness when personnel are off duty. Altogether, 20.2 percent (CI: 19.2–21.2) of reservists agreed with at least one of these statements related to support of drinking in military culture, though Coast Guard Reserve members were least likely to agree.

Tobacco is the single most preventable cause of disease and death in the United States.[3] Although rates of smoking have decreased over the past decade, smoking remains the cause of six in seven lung cancer deaths, one in three of all cancer deaths, and more than three in four cases of chronic obstructive pulmonary disease.[4] Although use of smokeless tobacco receives less attention, it has been associated with increased risk of cancer and stroke. Traditional tobacco products are not the only concern; the use of e-cigarettes has increased rapidly in recent years, with mounting evidence that their use could increase risk of cardiovascular and lung disease.

Findings from the 2018 HRBS include the following:

Marijuana and Drug Use

The 2018 HRBS measured use among reservists in the past 12 months and past 30 days for several types of drugs: marijuana or hashish, synthetic cannabis, inhalants to get high, synthetic stimulants, nonprescription cough or cold medicine, nonprescription anabolic steroids, and drugs other than marijuana and synthetic cannabis (these included cocaine [including crack], lysergic acid diethylamide [LSD], phencyclidine [PCP], 3,4-methylenedioxy-methamphetamine [MDMA, commonly called ecstasy], methamphetamine, heroin, and gamma hydroxybutyrate [GHB]). Findings include the following:

Reserve component members were more likely than the general population to be binge drinkers. Small but substantial numbers of the reserve component were also heavy drinkers, reported consequences from drinking, or viewed military culture as supporting drinking. DoD, the services, and the Coast Guard might wish to promote reserve component alcohol reduction and prevention programs that change cultural beliefs about alcohol use and promote self-care.

Many reserve component service members reported using tobacco in some form. Given the long-term health consequences of use, reducing tobacco use in all forms should be a high priority. DoD, the services, and the Coast Guard should consider ways to facilitate access to intervention and prevention approaches.

Illegal drug use in the past 12 months was more likely in the reserve component than in the active component. Preventing any drug use, including marijuana and synthetic cannabis use, should be a priority given the potential for immediate and long-term effects of drug use, as well as legal complications associated with use of drugs that are illicit at the federal level.

The sampling frame used a random sampling strategy stratified by service branch, pay grade, and gender. The overall weighted response rate for the survey was 9.4 percent, yielding a final analytic sample for the reserve component of 16,475 responses. To address missing data, RAND researchers used imputation, a statistical procedure that uses available data to predict missing values. To represent the reserve component population, they weighted responses to account for the oversampling of service members in certain strata. This research brief reports point estimates and 95-percent CIs.[10]