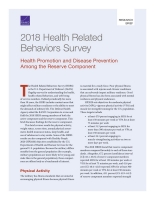 Health Promotion and Disease Prevention Among the Reserve Component

This brief reviews results for physical activity, weight status, screen time, annual physical assessment, health insurance status, sleep health, and use of substances to stay awake. Some of the HRBS results are also compared with Healthy People 2020 (HP2020) objectives established by the U.S. Department of Health and Human Services for the general U.S. population. Because the military differs notably from the general population (for example, military populations are more likely to be young and male than is the general population), these comparisons are offered only as a benchmark of interest.

Nearly 40 percent of the general U.S. population is classified as obese, increasing their risk for early mortality and several chronic diseases. HP2020 sets objectives for weight status for adults aged 20 or older based on the following Centers for Disease Control and Prevention body mass index (BMI)[1] categories.

It is important to note that BMI is an indirect measure of body fat, and more-muscular service members might have been misclassified as overweight or obese.

Screen time—time spent looking at a desktop or laptop computer, television, smartphone, tablet, or other handheld device or gaming system—is generally a sedentary behavior. As such, it is associated with a greater risk of obesity and mortality. Indeed, research shows that screen time is a risk factor for many cardiometabolic diseases and mortality, independent of time spent exercising.

Routine medical exams are used to identify asymptomatic illnesses, provide early intervention, and encourage healthy behavior. These exams have been shown to save lives through early detection of cancer and chronic conditions and to save money. The military requires that every service member complete an annual face-to-face medical assessment. These are called Periodic Health Assessments, and they are also used to evaluate individual readiness to deploy.

The 2018 HRBS asked respondents whether they had received a routine medical check-up in the previous 12 months. Routine check-up was defined as a general physical exam, not an exam for a specific injury, illness, or condition. Overall, 71.6 percent (CI: 70.4–72.7) of reservists reported receiving such an assessment.

The proportion of uninsured individuals in the United States has steadily decreased over the past decade, in large part because of the Affordable Care Act. In 2018, 91.5 percent of Americans had public or private health insurance,[2] though this proportion was still short of the HP2020 goal that 100 percent of Americans have health insurance of some kind. Health insurance status is particularly important for reservists because non–active-duty service members are generally not DoD health care beneficiaries, and deferred health care caused by lack of insurance could threaten medical deployability.

Overall, 92.0 percent (CI: 91.1–92.8) of reserve component respondents reported having some kind of health insurance. This falls short of the HP2020 goal but is comparable to the insurance rate for the general public. Reservists of junior ranks were less likely than others to report having health insurance.

According to HP2020, sufficient sleep is categorized as at least seven hours per 24-hour period among U.S. adults 22 and older and eight hours per 24-hour period for those 18 to 21. Lack of sufficient sleep is associated with daytime sleepiness, fatigue, diabetes, cardiovascular disease, obesity, and depression. The 2018 HRBS asked respondents how much sleep they got on average in a 24-hour period over the past 30 days, how sleep affected their energy levels, and whether they took any prescription or over-the-counter medications to aid sleep.

Across all branches of the reserves, 45.4 percent (CI: 44.2–46.6) of respondents met the HP2020 standards for sufficient sleep. This is lower than the 68.3 percent of all Americans who meet HP2020 sleep guidelines and the HP2020 goal that 72.8 percent of Americans meet these guidelines. In addition, 19.0 percent (CI: 18.1–19.9) of reservists reported moderate to severe lack of energy caused by poor sleep, and 6.2 percent (CI: 5.6–6.7) reported using prescription or over-the-counter sleep medications at least three days per week over the previous 30 days.

Use of Substances to Stay Awake

Energy supplements in the form of caffeinated beverages, over-the-counter medications, and prescription medications can boost endurance and assist with anaerobic activities. They can also have negative consequences, such as sleep loss, anxiety, and palpitations.

To compare HRBS results for the active and reserve components, RAND researchers constructed regression models that controlled for the demographic characteristics of the respondents. Significant differences they identified for reservists relative to active component members included

Perhaps more concerning are the proportions of reservists who did not report having an annual physical exam in the past year and who reported the lack any health insurance. Recent physical exams are required for deployment, and the lack of insurance could cause reservists to postpone exams. DoD, the services, and the Coast Guard should seek to improve reserve component compliance with physical examinations. They also might wish to designate a health care navigator to assist reserve component units with low health insurance rates and increase the number of members who are insured through the public or private marketplace.