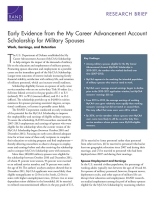 The U.S. Department of Defense established the My Career Advancement Account (MyCAA) Scholarship to help mitigate the impact of the demands of military life on the education and employment of military spouses. Promoting spouse education and employment in a portable career are the immediate goals of the MyCAA Scholarship. Longer-term outcomes of interest include increasing family financial stability, satisfaction with military life, and retention of military personnel, which can increase overall readiness.

Scholarship eligibility focuses on spouses of early career service members who are on active-duty Title 10 orders (i.e., full-time federal service) in the pay grades of E-1 to E-5 (enlisted), W-1 to W-2 (warrant officer), and O-1 to O-2 (officer). The scholarship provides up to $4,000 in tuition assistance for spouses pursuing associate's degrees, occupational certificates, or licenses in portable career fields.

More than 380,000 military spouses were eligible for the scholarship between October 2010 and December 2011, of whom 91 percent were women, 93 percent were married to an enlisted service member, and 74 percent were under the age of 30. The authors' analyses analyses showed that in December 2011, MyCAA applicants were more likely than eligible nonapplicants to (1) live in the South, (2) live in states with higher unemployment rates, (3) have two or more dependent minor children in the household, (4) be married to enlisted noncommissioned officers in the pay grade of E-5, (5) be married to Army personnel rather than personnel from other services, (6) be married to personnel who had at least one geographic relocation since 2007 and during their marriage, and (7) be married to personnel who had been deployed since 2007 and during their marriage.

In the U.S. married civilian population, the percentage of working adults typically rises between the ages of 18 and 30. For spouses of military personnel, however, frequent moves, deployment cycles, and other aspects of military life can disrupt their education and employment. RAND researchers studied employment among the pool of military spouses eligible for the MyCAA Scholarship by examining whether they had any earnings reported to the Social Security Administration in a given year. These unique data are particularly valuable as objective measures of spouse income over time. The analyses revealed that employment among spouses who did not use the scholarship declined from 70 percent in 2007 to 53 percent in 2013. For MyCAA Scholarship users known to have completed their education plans no later than December 2014, employment declined from 74 percent in 2007 to 58 percent in 2013. This period coincides with the Great Recession that began in December 2007.

RAND researchers developed earnings models focusing on the working MyCAA-eligible spouses who were ages 24 to 26 in 2011. This population represents 26 percent of the military spouses in the analytic sample. The researchers compared the average annual earnings patterns for MyCAA-eligible working spouses who used the scholarship and were known to have completed their educational plan by December 2014 with those of MyCAA-eligible working spouses who did not use the scholarship (Figure 1). Generally, in the U.S. population, earnings growth is significant over the first two decades that an individual is in the labor force, consistent with nonusers' earnings in the figure. It is not unexpected, however, to see earnings declines among populations prior to their entry into job training or education programs, as such declines are often a motivating factor for seeking additional training. Indeed, the research team found that working MyCAA users known to have completed an educational or training plan experienced average earnings that had stagnated for several years or even declined prior to October 2010, when the current version of the MyCAA Scholarship became available.

Declining earnings among working spouses prior to MyCAA application could reflect a career interruption caused by a family move or layoff. They could also reflect a voluntary or involuntary reduction from full-time to part-time employment or the decision or need to seek a new career or additional schooling. While the authors do not know the reason for the stagnation or decline in average earnings among working spouses, they did observe that earnings for this group of scholarship users grew after December 2011. After 2011, earnings grew relatively more rapidly for known MyCAA plan completers than for nonusers. Separate analyses using the entire age range of MyCAA-eligible spouses resemble those shown here.

The authors also explored through statistical models whether other observed factors could explain the difference between these two populations (such as sponsor pay grade, deployments, number of children, and geographic relocations). Even after controlling for such factors, working MyCAA users' earnings began to rise and converge with working nonusers' after 2011.

These analyses suggest that MyCAA Scholarships are reaching the intended population — including spouses who are more likely to want or need work, who are likely to be early in their careers, and who face military moves and deployments. Statistical models have ruled out many factors other than MyCAA, such as moves, deployments, and number of children, that could explain the differences between MyCAA users and nonusers in employment, earnings, and service member retention.

MyCAA users were less likely than similar nonusers to be employed in 2011 during the initial scholarship period when many were in school, but by 2013 they were more likely than nonusers to be working. In addition, working scholarship users known to have completed their MyCAA plans saw their annual earnings grow faster than those of working nonusers from 2011 to 2013. Additional years of data would be necessary to observe whether MyCAA users' earnings caught up to nonusers' after more MyCAA users returned from school to work. These results suggest that MyCAA is associated with employment and increased earnings. The relationship is not necessarily causal, however. It may be that scholarship recipients had a greater need or desire to work and therefore sought out the scholarship. But without the scholarship, these spouses might not have worked at as high of a rate in 2013 or might not have been able to improve their 2013 earnings to the degree that was observed. Either way, these results reflect positively on the MyCAA Scholarship. Finally, these analyses suggest that service members whose spouses were MyCAA Scholarship users were more likely than similar married service members to be on active duty three years after their spouse was awarded the scholarship.