My Career Advancement Account (MyCAA) Scholarships are intended to help military spouses with education and employment. This report evaluates MyCAA use, employment and earnings of eligible spouses, and continuation of their service members. The findings regarding work and earnings are promising, and personnel married to MyCAA users are more likely to still be on active duty three years after the spouse is awarded the scholarship. 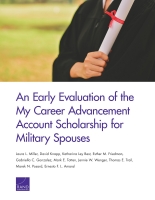 Past research has shown that compared to spouses of U.S. civilians, spouses of U.S. military personnel tend to earn less and are more likely to be unemployed or underemployed, even when they have more years of education or more work experience. To mitigate the impact of the demands of military life, in 2007 the Department of Defense established a portfolio of initiatives that provide career development and employment assistance for military spouses. One such initiative is the My Career Advancement Account (MyCAA) Scholarship, which targets spouses whose service member is early in his or her career. The scholarship provides up to $4,000 in financial assistance for spouses pursuing associate's degrees, occupational certificates, or licenses in portable career fields.

This report examines characteristics associated with MyCAA Scholarship application and use, scholarship plan completion, spouse employment and earnings, and service continuation of personnel married to MyCAA-eligible spouses. RAND examined the 2007–2013 employment and earnings data of spouses who were eligible for MyCAA when the current version of the scholarship began (between October 2010 and December 2011). The results show that MyCAA Scholarships are reaching the intended population; that MyCAA is associated with employment and higher earnings (although the relationship is not necessarily causal); and that service members of MyCAA Scholarship users are more likely than similar married service members to be on active duty three years after the spouse is awarded the scholarship.

Over 380,000 military spouses were eligible for the MyCAA scholarship between October 2010 and December 2011

This research was sponsored by the Office of the Deputy Assistant Secretary of Defense for Military Community and Family Policy and conducted within the Forces and Resources Policy Center of the RAND National Defense Research Institute, a federally funded research and development center sponsored by the Office of the Secretary of Defense, the Joint Staff, the Unified Combatant Commands, the Navy, the Marine Corps, the defense agencies, and the defense Intelligence Community.