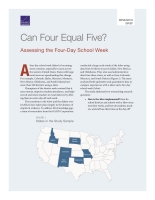 Champions of the shorter week contend that it saves money, improves student attendance, and helps recruit and retain teachers to rural districts by offering them an extra day off each week.

The transition to the 4dsw and the debate over its effects have taken place largely in the absence of empirical evidence. To address this knowledge gap, a team of researchers from the RAND Corporation conducted a large-scale study of the 4dsw using data from 36 districts across Idaho, New Mexico, and Oklahoma. They also used administrative data from these states, as well as from Colorado, Missouri, and South Dakota (Figure 1). The team analyzed both qualitative and quantitative data to compare experiences with a 4dsw and a five-day school week (5dsw).

How did schools structure their four-day week?

How did students spend their extra day?

Did school districts save money?

More than any other factor, the desire to save money motivates districts' choice of the 4dsw. One presumption is that one less day of school can translate into up to 20 percent in savings. However,

Did the 4dsw reduce student absences?

How did the 4dsw affect student achievement?

Did the 4dsw improve teacher recruitment and retention?

How did stakeholders perceive the 4dsw?

The results point to trade-offs in the 4dsw model. Analysis of data from five states—Idaho, Missouri, New Mexico, Oklahoma, and South Dakota—indicates some evidence of educational harm: The test scores for 4dsw districts improved but did so more slowly than they would have if the same schools had maintained a 5dsw. On the other hand, families and students in 4dsw districts—which are primarily in rural communities in the Western United States—reported highly valuing the extra time that the four-day schedule allowed the family to spend together.

This study, the largest of its kind to date, presents findings that can help inform choices by school, district, and state education leaders about the 4dsw model and develop policies or guide change as needed. Although this research can help promote understanding of how much the 4dsw affects outcomes, each community must ultimately decide how to weigh which outcomes matter the most.