Future conflict projections suggest a continued decline in both interstate and intrastate conflict is likely through 2040. RAND researchers conclude the Army should help to support these trends by preparing for conventional wars against other states, although its most likely future missions will continue to involve irregular warfare against nonstate actors. 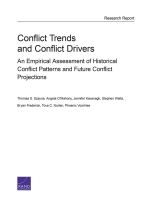 This research was sponsored by the Office of the Deputy Chief of Staff, G-2 (Intelligence), Headquarters, Department of the Army, and conducted by the Strategy, Doctrine, and Resources Program within the RAND Arroyo Center.