This report assesses trends in armed conflict and their implications for defense planning. The incidence of such conflict has declined in recent decades and only sharply different alternative future scenarios are likely to change such trends. Several key political, economic, and strategic factors, including the deterrent effect of the U.S. military, appear to have contributed to this decline and are likely to continue to do so in the future. 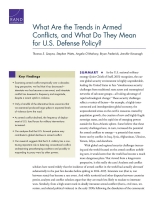 What Are the Trends in Armed Conflicts, and What Do They Mean for U.S. Defense Policy?

From a decades-long perspective, the incidence of armed conflict has decreased. Interstate war (that is, war between states) has become a rare event. Similarly, intrastate conflict (that is, civil wars and related political violence) had declined steadily for two decades before an uptick in conflict sparked by the wars in Syria and Ukraine in 2014. Many factors have contributed to the long-term decline in conflict and most of those factors remain in place. Of the alternative future scenarios we examined, only a few produced large spikes in armed conflict.

But the defense policy implications of these findings are not straightforward, since conflict trends do not follow straight lines and the U.S. military prepares to defend the United States in periods of crisis, not just for the "average" level of threat or in response to "average" incidence of conflict. There are also substantial regional differences in incidence of armed conflict, and global trends do not necessarily reflect those trends. Moreover, even if armed conflict continues to decline, this fact does not necessarily indicate lower demand for U.S. military forces. In fact, even as armed conflict declined in the post–Cold War era, the frequency of deployments of U.S. land forces for military interventions rose substantially. Finally, the U.S. military preponderance may be a part of the explanation for the decline in armed conflict in the first place. The deterrent effect of the U.S. military and its forward posture may contribute to the further global decline of deadly armed conflict.

The research described in this report was conducted by the RAND Arroyo Center.