While the incidence of wars between states has declined significantly over the past several decades, intrastate violence appears to have stabilized following a decline in the aftermath of the Cold War. This report explores, through an extensive literature review, whether the current conflict patterns represent a permanent shift or a temporary aberration. 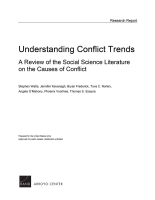 There has been a significant decline in the incidence of wars between states over the past several decades. The incidence of intrastate violence, on the other hand, appears to have stabilized following a decline in the aftermath of the Cold War. There is little consensus on the causes of these changes in conflict patterns. The critical question for policymakers is whether the current conflict patterns represent a permanent shift or a temporary aberration. This report explores this question through an extensive review of the literature on armed conflicts and global strategic trends to determine the possible reasons for the change in conflict patterns and to assess the potential for a change in these patterns that might portend increased propensity toward state-on-state conflicts. This report is likely to be of use for developing leading indicators of conflicts or constructing future scenarios for war games or defense planning.

This research was sponsored by the Deputy Chief of Staff, G-2, U.S. Army, and conducted by the Strategy, Doctrine, and Resources Program within the RAND Arroyo Center.