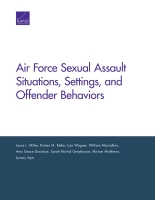 To assist Air Force efforts to prevent and respond to sexual assault, this report focuses on providing a better understanding of sexual assaults committed by airmen, including suspect characteristics and behaviors, the suspect's relationship to the victim, victim characteristics, the settings and circumstances of sexual assaults, and behavior and justifications following sexual assaults. To do so, the researchers analyzed investigation and court-martial records from closed cases of convicted and other alleged Air Force sexual assault offenders. The cases included offenders who took advantage of norms of group socializing with alcohol, trust in fellow airmen, and responsible drinking and driving to create situations that facilitate sexual assault. Some victims and suspects were confused about whether certain behaviors constitute sexual assault, such as first attempts to initiate sexual activities with dates or friends, unwanted acts that followed consensual sexual behavior, or actions of highly intoxicated individuals. Notably, although far less common, reported offenders who sexually assaulted their spouses had typically also harmed others, tended to have behavioral and emotional problems, and had previously caught the attention of Air Force authorities. After a sexual assault, offenders may apologize and attempt to persuade the victim or others to forgive them and not report them to authorities. This report concludes by describing how these sexual assault data complement other sources and by providing recommendations related to the themes identified in this analysis.

The Observed Patterns of Behavior Are Not Unique to Airmen

The research reported here was commissioned by the Director of the Air Force Sexual Assault Prevention and Response program in the Office of the Vice Chief of Staff and the commander of Air Force Recruiting Service and conducted within the Manpower, Personnel, and Training Program of RAND Project AIR FORCE.