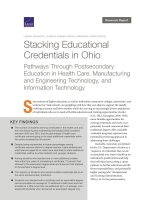 Stackable credential programs—that is, programs that facilitate students' ability to earn multiple postsecondary certificates or degrees—have been a priority for Ohio, which has a long history of legislation, state and regional initiatives, and institution-led efforts to build more-effective pathways to address the needs of employers and students. To assess progress and inform ongoing efforts to scale stackable credentials, the Ohio Department of Higher Education and the RAND Corporation established a research partnership. In this report, RAND researchers examine students who earned postsecondary certificates in health care, manufacturing and engineering technology (MET), or information technology (IT) fields at Ohio institutions between the 2004–2005 and 2012–2013 academic years and went on to earn (or stack) additional educational credentials. The authors descriptively examine the completion of credentials over time, the types of students who are earning certificates and going on to stack credentials, the subfields and levels of credentials earned, the types of institutions students earned credentials from, and the credit accumulation and terms of enrollment for students earning different types of credentials.