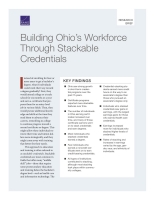 Instead of enrolling for four or more years to get a bachelor's degree, what if individuals could work their way toward a degree gradually? First, they would attend college or a trade school for six months or a year and earn a certificate that prepares them for an entry-level job in various fields. Then, they would pursue additional knowledge and skills at the time they need them to advance their careers, reenrolling in college to continue progress toward a second certificate or degree. This might allow these individuals to invest their time and tuition dollars more strategically, and they might come away with training that better fits their needs.

Ohio has been a leader in scaling stackable credential programs. The state passed initial legislation on stackable credentials nearly 15 years ago, and it has since rolled out a series of initiatives that expand opportunities for individuals to stack credentials. For example, Ohio established statewide agreements that require credits to be awarded for certain blocks of coursework that previously were not eligible for credit, and it increased the funding allocated to certificate programs. All of Ohio's public education and training programs are involved in its efforts. These include Ohio Technical Centers (OTCs), which award "clock-hour" certificates that do not award immediate college credit (i.e., noncredit certificates) but can potentially be transferred into credit-bearing programs, and the certificate and degree programs at the state's community colleges and universities.

Have institutions changed the programs that they offer? Are students stacking credentials, and, when they do, are they seeing an increase in earnings? Researchers at the RAND Corporation and the Ohio Department of Higher Education (ODHE) established a multiyear partnership to answer these questions and others. To find the answers, the team examined the state's stackable credential offerings and student outcomes in three fields: health care, manufacturing and engineering technology (MET), and information technology (IT). These three fields account for more than half of all certificates awarded in the state and have been a primary focus of its stackable credential efforts.

This research brief summarizes key findings and implications of the project. These findings can inform Ohio's efforts to scale effective education and training pathways and might offer useful evidence to states pursuing similar initiatives.

How the Study Was Conducted

The team examined statewide educational records, focusing on credentials awarded between 2005 and 2019 by Ohio's public postsecondary institutions. Most of the analysis focused on student-level data. The researchers and state leaders were interested not only in aggregate counts of credentials but also in how students earned these credentials, whether credentials led to increased earnings, and whether patterns of credential-stacking and earnings differed based on where an individual earned credentials, the type of certificate initially earned, or the demographic characteristics of the individual.

The team examined individuals who stacked credentials over varying time frames after completing the initial certificate, following students for up to six years to identify stacking. The additional credentials stacked could include another certificate, an associate's degree, or a bachelor's degree and could be in the same area of study or other areas of study. The research team then followed students into the workforce, using records from the state unemployment insurance system to estimate changes in an individual's earnings after earning and stacking credentials.

The team also examined data on the programs offered by Ohio public institutions. Using student-level credential data, the team tracked the number of programs that awarded credentials at different levels over time in the three fields. Using program application data that institutions submit to ODHE to obtain approval for technical certificate programs, the team examined the degree to which new certificate programs were being built with stackable features (e.g., certificate embedded in degree program, program aligned with industry license or certification).

Most individuals who stacked credentials earned a degree. Of those who stacked credentials across the three fields, 71 percent earned an associate's degree and 9 percent earned a bachelor's degree within four years of certificate completion. This suggests that the majority of individuals stacked progressively (also called vertically), moving from shorter-term to longer-term programs and noncredit to credit programs rather than earning two certificates at the same level.

Rates of stacking and increases in earnings varied by the age, gender, race, and ethnicity of individuals. White students, younger students, and women were more likely to stack credentials. The team found higher average earnings gains for women relative to men (47 percent versus 22 percent) and for younger learners relative to learners aged 25 and older (53 percent versus 31 percent). Results by race and ethnicity indicated that black and Hispanic individuals saw equal or greater earnings gains from the initial certificate relative to white individuals. However, when white certificate-earners went on to stack credentials, they experienced larger earnings gains, leading to greater overall gains relative to black individuals who stacked (38 percent versus 31 percent). Identifying the sources of demographic variation was beyond the scope of the study, but the data suggest that some of the variation is driven by sorting into different fields. For example, younger learners and women are more likely to enter into health care fields, which generate higher earnings relative to MET and IT credentials.

The study suggests that stackable credentials offer a promising strategy for reshaping postsecondary education and training in applied fields like health care, MET, and IT. There was also evidence that pointed to some areas for further exploration and improvement. A few of these takeaways are highlighted here.

Evidence suggests that Ohio has robust pipelines of students stacking credentials. The state's public institutions have been expanding certificate programs, and more students have been completing certificates. Program applications suggest that more than half of new certificate programs are embedded in degree programs, and large percentages of certificate-earners are going on to stack credentials and earn degrees. Stacking is happening across all types of institutions. When individuals stack credentials, they see substantial earnings gains. This suggests that Ohio is at least partially meeting its goals for scaling stackable credentials.

Stackable credentials are new, and improvement might be needed to strengthen pipelines. There was wide variation in stacking and earnings outcomes across fields, credential types, and demographic characteristics of individuals. More work might be needed to strengthen stackable credential pipelines in certain areas and ensure that high-quality stackable opportunities are accessible to individuals throughout the system. For example, short-term certificates and IT certificates did not result in positive earnings gains on their own, suggesting that institutions and individuals might want to examine these programs to ensure that they are providing value in the labor market. Cross-institution pipelines and noncredit-to-credit pipelines could also potentially be strengthened. Despite large estimated earnings gains for individuals who moved on to earn credit-bearing credentials after earning noncredit credentials, very few noncredit certificate-earners from OTCs went on to earn credit-bearing credentials at community colleges and universities. Ohio's ongoing efforts to expand statewide agreements around transfer of coursework for credit across institutions is one example of a strategy the state is pursuing that might support more cross-institution and noncredit-to-credit stacking. And finally, given slightly lower rates of stacking and lower earnings gains from stacking among adult learners and black and Hispanic individuals, more work might be needed to ensure equity within stackable credential pipelines. Ohio should continue to identify and scale promising approaches and address challenges within stackable credential pipelines to ensure that they provide strong pathways for workforce development.

More research is needed to fully understand the value of and to improve stackable credential pipelines. Many important questions were beyond the scope of this study. For example, more causal evidence is needed to determine whether the scaling of stackable programs and initiatives is leading to improved outcomes for students. In addition, more systematic evidence on how stackable credential programs are being implemented and how implementation practices or stackable design characteristics are related to student outcomes is needed. Researchers should continue to explore the drivers of variation in outcomes across fields and student subgroups to determine which credentials are providing value and who is benefiting from stackable credentials. Additional issues that are not well understood are how individuals are transitioning between work and stackable educational programs and how to smooth these transitions and create better partnerships with employers. As states and institutions scale stackable credentials, it is important to continue examining data on programs and student outcomes to ensure that these initiatives are achieving their intended aims of strengthening workforce development and pipelines into postsecondary education.