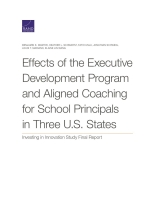 Effects of the Executive Development Program and Aligned Coaching for School Principals in Three U.S. States

In this report, part of a series on professional development for school principals, the authors analyze the effects of a large-scale implementation of the National Institute for School Leadership's (NISL's) Executive Development Program (EDP) and paired coaching for middle school principals in three states. The EDP is a widely used principal professional development program that previously has been shown to have a positive influence on student achievement outcomes. For this study, NISL-certified coaches offered at least 60 hours of one-on-one coaching to principals.

The research described in this report was sponsored by the by Criterion Education, with funding from NISL through the i3 grant from the U.S. Department of Education. The research was conducted by RAND Education and Labor.