The Costs of the Israeli-Palestinian Conflict

Despite repeated initiatives to resolve the conflict between Israelis and Palestinians, it has endured for decades with periodic violent eruptions. Can meaningful policy discussion help to break the impasse?

The study's goal is to give all parties comprehensive, reliable information about available options and their expected costs and consequences.

An overview of the findings is highlighted in the chart to the right, which shows RAND's assumption-based estimates for the percent change in Israeli and Palestinian GDP (as of 2024) for each of the trajectories. A two-state solution provides by far the best economic outcomes for both Israelis and Palestinians, and a violent uprising would profoundly harm both economies.

RAND's assumption-based estimates for percent change in GDP as of 2024. 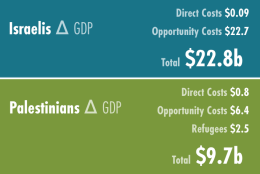 As part of the study, RAND has developed an interactive Costs of Conflict Calculator, which allows you to change key cost factors and explore how those changes affect the economic costs and benefits of each of the alternative scenarios considered in the report.

VIDEO: Watch The Costs of the Israeli-Palestinian Conflict press conference, held at the Jerusalem Press Club on June 8, 2015.