Results from Air Force Reserve Respondents to the HRBS 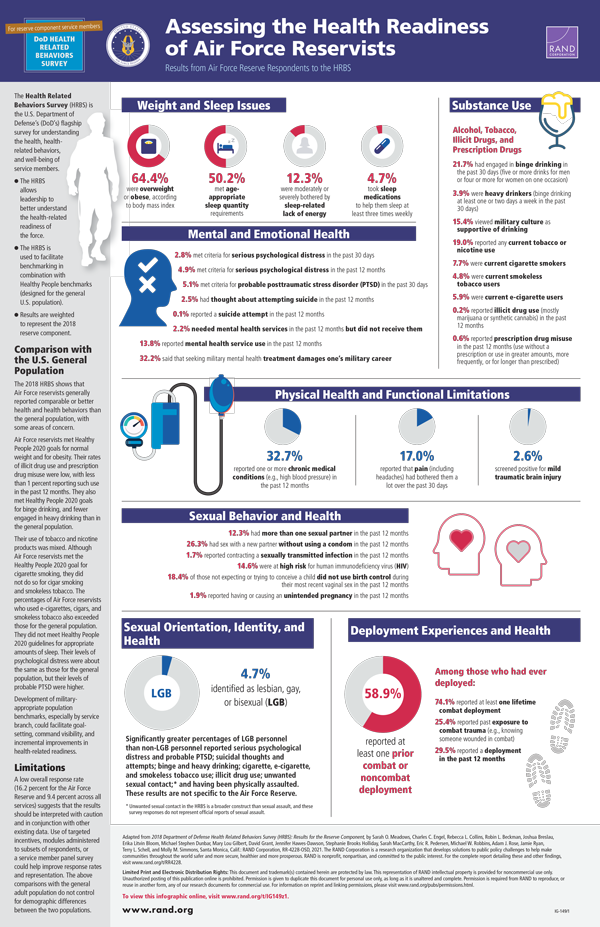 Significantly greater percentages of LGB personnel than non-LGB personnel reported serious psychological distress and probable PTSD ; suicidal thoughts and attempts; binge and heavy drinking; cigarette, e-cigarette, and smokeless tobacco use; illicit drug use; unwanted sexual contact;* and having been physically assaulted. These results are not specific to the Air Force Reserve.

58.9% reported at least one prior combat or noncombat deployment

The 2018 HRBS shows that Air Force reservists generally reported comparable or better health and health behaviors than the general population, with some areas of concern.

Air Force reservists met Healthy People 2020 goals for normal weight and for obesity. Their rates of illicit drug use and prescription drug misuse were low, with less than 1 percent reporting such use in the past 12 months. They also met Healthy People 2020 goals for binge drinking, and fewer engaged in heavy drinking than in the general population.

Their use of tobacco and nicotine products was mixed. Although Air Force reservists met the Healthy People 2020 goal for cigarette smoking, they did not do so for cigar smoking and smokeless tobacco. The percentages of Air Force reservists who used e-cigarettes, cigars, and smokeless tobacco also exceeded those for the general population. They did not meet Healthy People 2020 guidelines for appropriate amounts of sleep. Their levels of psychological distress were about the same as those for the general population, but their levels of probable PTSD were higher.

A low overall response rate (16.2 percent for the Air Force Reserve and 9.4 percent across all services) suggests that the results should be interpreted with caution and in conjunction with other existing data. Use of targeted incentives, modules administered to subsets of respondents, or a service member panel survey could help improve response rates and representation. The above comparisons with the general adult population do not control for demographic differences between the two populations.