A key finding of previous RAND research on insurgencies worldwide since World War II was that an overall score on a scorecard of 15 equally weighted good and 11 equally weighted bad counterinsurgency factors and practices perfectly discriminated conflicts' historical outcomes. Using the scorecard approach and an expert elicitation (Delphi) exercise, a RAND study sought to extend the findings to the case of Afghanistan in early 2013. 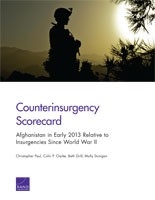 Afghanistan in Early 2013 Relative to Insurgencies Since World War II

The RAND report Paths to Victory: Lessons from Modern Insurgencies added 41 new cases to a previously studied set of 30 insurgencies, examining the 71 insurgencies begun and completed worldwide between World War II and 2008 to analyze correlates of success in counterinsurgency (COIN). A key finding of this research was that a case's score on a scorecard of 15 equally weighted good and 11 equally weighted bad COIN factors and practices perfectly discriminated the outcomes of the cases analyzed. That is, the balance of good and bad factors and practices correlated with either a COIN win (insurgency loss) or a COIN loss (insurgency win) in the overall case. Using the scorecard approach as its foundation, a RAND study sought to apply the findings to the case of Afghanistan in early 2013. The effort involved an expert elicitation, or Delphi exercise, in which experts were asked to make "worst-case" assessments of the factors to complete the scorecard for ongoing operations in Afghanistan. The consensus results revealed that early 2013 Afghanistan ranks among the historical COIN winners, but its score is equal to those of the lowest-scoring historical wins. This tenuous position points to several areas in need of improvement, but particularly the need to disrupt the flow of insurgent support and the need for the Afghan government and Afghan security forces to better demonstrate their commitment and motivation. Afghanistan in early 2011 scored in the middle of the historical record in terms of COIN wins and losses, suggesting an overall improvement in COIN progress in that conflict by early 2013. However, conditions may change as coalition forces prepare to hand over responsibility for the country's security to the Afghan government and Afghan security forces in 2014.

Although Afghanistan in Early 2013 Scored Among Historical Winners in an Expert Elicitation Exercise, There Is Cause for Concern

The research described in this report was prepared for the Office of the Secretary of Defense (OSD). The research was conducted within the RAND National Defense Research Institute, a federally funded research and development center sponsored b OSD, the Joint Staff, the Unified Combatant Commands, the Navy, the Marine Corps, the defense agencies, and the defense Intelligence Community.