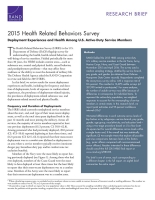 The HRBS asked currently nondeployed service members about the start, end, and type of their most-recent deployment, as well as the total time spent deployed both in the past 12 months and since joining the military. Across all services, the majority of service members reported at least one previous deployment (61.3 percent; CI: 59.8–62.8). Among personnel who had previously deployed, 49.0 percent (CI: 47.5–50.6) reported deploying at least three times, and 64.3 percent (CI: 62.5–66.1) reported that their most-recent deployment was to a combat zone (defined as deployment to an area where a service member typically receives imminent danger pay, hazardous duty pay, and/or combat zone tax exclusion benefits).

Deployments and exposure to combat and other traumatic events place military personnel at increased risk of injury. Identifying injurious events that result in postconcussive symptoms or that can lead to concussion, mild traumatic brain injury (mTBI),[4] or moderate to severe traumatic brain injury (TBI) is critical to protecting the mental health and cognitive functioning of military personnel and to preventing future deployment-related injuries.

Army personnel were more likely than those of other services to report any deployment injury, mTBI, or postconcussive symptoms (Figure 2). By pay grade, senior enlisted personnel were the most likely to have suffered a deployment injury, as well as mTBI or postconcussive symptoms resulting from such an injury. Men were also more likely than women to report such experiences.

Although the military has made progress toward reducing cigarette smoking and illicit drug use among active-duty service members, other forms of nicotine, alcohol, and prescription medication continue to be pervasive throughout the military. (For more information, see the research brief on substance use among service members.[5]) Understanding the trends in tobacco, alcohol, illicit drug, and prescription drug use during and after deployment are vital to informing policies to maintain the health and readiness of the armed forces.

To capture the relationship of self-reported substance use and deployment, we used a modified question from the National Survey on Drug Use and Health. This item measures the frequency of use of alcohol, tobacco, smokeless tobacco, cigars, prescription medications, marijuana, opium, heroin, morphine, and related medications during the most-recent deployment. When interpreting these figures, it is important to note that DoD policies regarding alcohol use vary significantly depending on the geographic location of a deployment. For example, alcohol possession and consumption have long been banned for military personnel throughout nearly all the Middle East. In addition, a 2008 report by the Army's Mental Health Assessment Team found lower alcohol use in theater than was reported in the 2015 HRBS; however, comparing these results is made difficult by several factors, such as telescoping, recall biases among HRBS respondents, and the anonymity that the online HRBS afforded respondents.

Furthermore, when comparing substance use during the most-recent deployment, we found no statistically significant differences between those who had ever screened positive for mTBI and those who had never screened positive for TBI (mild or otherwise) (analysis restricted to those with a deployment in the past three years). However, we did find differences in type of substance use. Specifically, those with mTBI were more likely to report having used cigarettes, smokeless tobacco, or prescription drugs during their most-recent deployment, and those without TBI were more likely to use alcohol during such a deployment.

Deployment in the past three years was associated with prevalence of various mental health conditions. The percentage of recently deployed service members with probable depression, generalized anxiety disorder (GAD), or posttraumatic stress disorder (PTSD) was slightly higher than the percentage among all active-duty service members. (For more on the prevalence of these conditions among all military members and how we measured them, see the research brief on service members' mental and emotional health.[6])

Among service members deployed in the past three years, those with high levels of combat exposure were significantly more likely than others to have probable GAD, PTSD, and aggressive behavior (Figure 4). Similarly, those reporting mTBI had significantly higher prevalence of probable depression, GAD, PTSD, aggressive behavior, and impulsivity than those not reporting a TBI.

Physical health problems related to deployment and combat exposure have important implications for readiness. Understanding the prevalence of physical health issues across the services has the potential to inform early detection and treatment processes, improve general health, and mitigate impacts on readiness. (For more details on how the 2015 HRBS assessed these issues, see the research brief on service members' physical health and functional limitations.[7])

Among service members who deployed in the past three years, those with high combat exposure or mTBI were far more likely than those without to have a high physical symptom severity score or report being bothered a lot by at least one physical symptom (including headaches) in the past month (Figure 5). Physical symptom scores summarize respondent reports of back pain; pain in the arms, legs, or joints; chest pain or shortness of breath; and headache pain.

Taken together, these results suggest that active-duty service members have been widely exposed to combat and associated trauma in recent years. Perhaps as a result, service members with greater exposure showed elevated rates of probable anxiety and depressive disorders, PTSD, physical health problems (such as mTBI, postconcussive symptoms, somatic symptoms, and chronic pain), and negative health behaviors (e.g., substance use) compared with their less-exposed peers. Of note, mTBI was a significant correlate of other negative health outcomes. Future iterations of the HRBS should continue to monitor these trends in order to assess associations between deployment, combat exposure, and the health and well-being of service members.