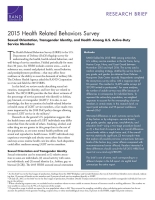 RAND fielded the 2015 HRBS among active-duty U.S. military service members in the Air Force, Army, Marine Corps, Navy, and Coast Guard between November 2015 and April 2016. The survey used a random sampling strategy, stratified by service branch, pay grade, and gender (as obtained from Defense Manpower Data Center records). Respondents completed the anonymous survey online, with a response rate of 8.6 percent. This resulted in 16,699 usable surveys (of 201,990 invited to participate).[3] For some analyses, the number of usable surveys may differ because of differences in nonresponse for individual items. To represent the active-duty population, we weighted responses to account for the oversampling of service members in certain strata. In this research brief, we report point estimates and 95-percent confidence intervals (CIs).[4]

In this brief, we review results describing sexual orientation, transgender identity, and how they are related to health. The 2015 HRBS provides the first direct estimate of the percentage of service personnel who identify as lesbian, gay, bisexual, or transgender (LGBT).[1] It is also, to our knowledge, the first to examine the health-related behavior or health status of LGBT service members, a fact made even more important by the 2010 DoD policy changes allowing for open LGBT service in the military.[2]

Research on the general U.S. population suggests that the health issues and needs of LGBT individuals may differ somewhat from the needs of others. Smoking, alcohol, and other drug use are greater in this group than in the rest of the population, as are some mental health problems and sexual and reproductive health issues. LGBT individuals may experience overweight and obesity more often than others and may access routine health care less often. Such disparities could affect readiness among LGBT service members.

Overall, as Table 1 shows, 5.8 percent (CI: 5.0–6.6) of HRBS respondents identified as LGB. This estimate falls between estimates for U.S. adults aged 18–64 years and for U.S. high school students, which is not surprising given the age profile of the military.

Altogether, 6.1 percent (CI: 5.3–6.9) of service members identified as LGBT. As Table 2 shows, LGBT identity was higher among personnel in the Navy than in other services and among junior enlisted personnel than other pay grades. Almost four times as many service members who reported being female identified as LGBT than those who reported being male.

LGBT respondents were more likely to report several adverse health behaviors and some worse health outcomes than non-LGBT service members. We compared the two groups on a wide variety of measures where prior studies of the general population have previously shown adverse behaviors or outcomes for LGBT individuals overall or the subgroups this category encompasses (Table 3). Compared with other personnel, LGBT service members were

While LGBT personnel obtained routine medical care in percentages similar to non-LGBT personnel, they reported more smoking, binge drinking, risky sexual behavior, and adverse sexual health outcomes. The percentages of LGBT personnel experiencing mental health issues and those with a history of physical abuse and sexual assault were particularly high. These observed differences were similar to those observed for LGBT people in the general U.S. population.

Although these individuals are a small portion of the force, these disparities warrant close attention and tracking by DoD and the Coast Guard so that the specific needs of this subgroup can be addressed. This is particularly important for the Navy, which has the highest percentage of gay men serving and of LGBT service members overall, and in the Marine Corps, which has the highest percentage of bisexual women serving. Policies that enhance, for example, efforts to prevent substance use and sexual risk behaviors may address LGBT health disparities. Although one option is to target the LGBT population with clinical and population efforts, such an approach may stigmatize LGBT service members. Therefore, it may be best to apply these efforts equally across the military, which could lead to broader population benefits.