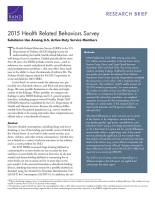 In this brief, we review results for substance use, particularly use of alcohol, tobacco, and illicit and prescription drugs. We note possible limitations to the data and implications of the findings. Where possible, we compare our findings to prior HRBS findings and U.S. general population data, including progress toward Healthy People 2020 (HP2020) objectives established by the U.S. Department of Health and Human Services. Because the military differs notably from the general population (e.g., service members are more likely to be young and male), these comparisons are offered only as a benchmark of interest.

Excessive alcohol consumption, including binge and heavy drinking, is one of the leading preventable causes of death in the United States. It can lead to risky sexual activity, accidents, violence, and other serious consequences. Alcohol misuse is linked to a variety of adverse outcomes in the military and is a costly problem for DoD.

Binge, heavy, and hazardous drinking varied by service and pay grade and were all higher among men than women. All three behaviors were most prevalent in the Marine Corps, where hazardous or disordered drinking occurred among nearly half of service members (Figure 1). The Air Force had the lowest percentage of each of these drinking behaviors. In general, higher percentages of problematic drinkers were found among junior enlisted members, although the percentage of hazardous or disordered drinkers was highest among junior officers.

In the 2015 HRBS, 8.2 percent (CI: 7.2–9.1) of service members reported one or more serious consequences from drinking (e.g., "I hit my spouse/significant other after having too much to drink"). In addition, 6.9 percent (CI: 5.9–7.8) reported alcohol-related risk behaviors (e.g., "I drove a car or other vehicle when I had too much to drink"); in 2011, 9.7 percent of HRBS respondents reported such risk behaviors. Across the services, 6.1 percent (CI: 5.3–6.9) of respondents reported work-related productivity loss from alcohol use.

Tobacco use is the single-most preventable cause of disease and death in the United States. Exposure to secondhand smoke also poses grave risks, including lung cancer. Cigarette smoking is the most common form of tobacco use. The percentage of current adult smokers in the nation has been declining over the past decade, as has the percentage of daily smokers and the number of cigarettes typically consumed by them. However, smoking rates remain particularly high among men and younger adults — demographic groups that make up much of the U.S. military.

Other forms of tobacco use are also of concern. Smokeless tobacco (e.g., chewing tobacco, snuff) is a particular issue in the military. And although the health effects of electronic cigarettes (e-cigarettes) are not yet known, they contain chemicals that may harm users and those with secondhand exposure.

Findings from the 2015 HRBS include the following:

Illicit and Prescription Drug Use

Among active-duty service members, 4.1 percent (CI: 3.5–4.8) misused one or more prescription drug types in the past year, and 0.9 percent (CI: 0.6–1.2) overused them. In the U.S. general population in 2014, 5.6 percent of adults reported nonmedical use (i.e., overuse, misuse, or use "to get high or feel good") of prescription drugs. While the HRBS and general population measures are not directly comparable because of differences in measurement, they suggest that overall rates of misuse and overuse in the military are in line with those in the United States overall.

Service members were most likely to report misuse (2.4 percent; CI: 1.8–2.9) or overuse (0.7 percent; CI: 0.4–1.1) of pain relievers versus other types of prescription drugs. Because the denominator for calculating misuse and overuse of specific drugs in the 2011 HRBS was different from that used in 2015, we cannot directly compare the percentages. However, the relative percentages misusing each drug type in 2011 can be compared and were similar to those observed in 2015: In both years, pain relievers and sedatives were more commonly misused and overused relative to steroids and stimulants.

Rates of binge drinking in the services in 2015 remained nearly as high as they were in 2011 and high enough to continue causing concern. Percentages of service members who reported hazardous or disordered drinking were also substantial. Consistent with this, one in 12 service members reported experiencing one or more serious consequences from drinking in the past year. About two-thirds of HRBS respondents also perceived military culture as supportive of drinking, while fewer than one in five indicated that their supervisor strongly discourages alcohol use. This suggests that a change in culture clearly communicated from higher ranks could substantially reduce drinking and its consequences. Given that alcohol is often purchased on base, raising prices or otherwise limiting sales may also be effective and help communicate a shift in culture.

Cigarette smoking in the military has decreased substantially over the past decade, and those who smoke are smoking less. The HRBS found that cigarette smoking is less common in the military than in the general population. Still, any smoking puts the immediate and long-term health of service members at risk. Furthermore, smokeless tobacco use is relatively high in the military, and e-cigarette use is a growing problem. One policy lever that appears promising for addressing tobacco use is a shift in perceived military culture. Few service personnel felt that cigarette and smokeless tobacco use were strongly discouraged by their supervisor. In addition, most service members bought cigarettes on base. This suggests that changes to reduce on-base sales of cigarettes, or to increase their price, could help reduce tobacco use.

Rates of illicit drug use among service members have decreased in recent years and were at low levels in the 2015 HRBS. Use of prescription opioid pain relievers and use of sedatives have both decreased as well. Nonetheless, both of these prescription drug types were misused more often than other drugs studied, and pain relievers were substantially more likely to be overused than any other drug type.