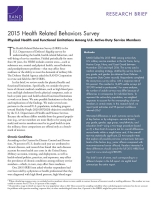 The Health Related Behaviors Survey (HRBS) is the U.S. Department of Defense's flagship survey for understanding the health, health-related behaviors, and well-being of service members. Fielded periodically for more than 30 years, the HRBS includes content areas — such as substance use, mental and physical health, sexual behavior, and postdeployment problems — that may affect force readiness or the ability to meet the demands of military life. The Defense Health Agency asked the RAND Corporation to revise and field the 2015 HRBS.

In this brief, we review results for physical health and functional limitations. Specifically, we consider the prevalence of chronic medical conditions, such as high blood pressure and high cholesterol levels; physical symptoms, such as back or joint pain; and health-related functional limitations at work or at home. We note possible limitations to the data and implications of the findings. We make several comparisons to the overall U.S. population, including progress toward Healthy People 2020 (HP2020) objectives established by the U.S. Department of Health and Human Services. Because the military differs notably from the general population (e.g., service members are more likely to be young and male) and service members must be in good health to join the military, these comparisons are offered only as a benchmark of interest.

According to the Centers for Disease Control and Prevention, 70 percent of U.S. deaths each year are attributed to chronic diseases, and research has found that such diseases account for most health care costs in the United States. Military accession, training, and deployment, as well as health-related policies, practices, and exposures, may affect the prevalence of chronic conditions among military service members — which, in turn, may affect force readiness.

One 2015 HRBS item asked whether respondents had ever been told by a physician or health professional that they were diagnosed with high blood pressure, high blood sugar or diabetes, high cholesterol, respiratory problems, arthritis, heart disease or other heart condition, digestive ulcer, skin cancer, or some other cancer. For those conditions marked positively, the survey asked whether the respondent was currently taking medication for the problem.

Among all active-duty personnel, the prevalence of these conditions was lower than it is for the general U.S. population. Prevalence of high blood pressure and high cholesterol was also below the HP2020 target levels. However, demographic differences (particularly age and gender) between the military and general populations make direct comparisons difficult.

By pay grade, senior enlisted personnel, warrant officers, and senior officers were more likely to report one or more chronic conditions in their lifetime; half of the members of these three groups, and more than two-thirds of higher enlisted ranks and warrant officers, reported at least one chronic condition. Because pay grade is highly correlated with age, these trends are likely due to some combination of cumulative military experience and aging. Men and women did not differ significantly in their likelihood of reporting a chronic condition.

Physical symptoms, such as back or joint pain, account for most outpatient visits in the general population and are associated with expensive tests and procedures. One-third of somatic symptoms do not have a disease-based explanation and are considered to be medically unexplained. Physical symptoms are common in the military, and multiple physical symptoms have been reported following deployment.

The HRBS asked respondents to complete a checklist of eight common physical symptoms — stomach or bowel problems; back pain; pain in the arms, legs, or joints; headaches; chest pain or shortness of breath; dizziness; feeling tired or having low energy; trouble sleeping — based on the Somatic Symptom Scale-8. Among all active-duty service members, 35.7 percent (CI: 34.2–37.3) reported being "bothered a lot" in the past 30 days by at least one of these symptoms (Figure 2). Respondents in the Army (42.5 percent; CI: 39.4–45.7) were the most likely to report being bothered a lot by one of these symptoms; those in the Coast Guard (24.3 percent; CI: 23.0–25.7) were the least likely. The most commonly reported symptoms were trouble sleeping (25.0 percent; CI: 23.6–26.4), feeling tired or having low energy (23.2 percent; CI: 21.9–24.6), and back pain (22.5 percent; CI: 21.2–23.9). Respondents in the Marine Corps were the most likely to report trouble sleeping or feeling tired or having low energy, while those in the Army were the most likely to report back pain.

The HRBS assessed functional limitations using a modified version of the Sheehan Disability Scale. Respondents completed five items assessing the extent to which health problems affected them at work or school, in their social life, and in their family life or home responsibilities. Respondents were also asked how many days in the past 30 days their mental or physical symptoms caused them to miss work or school (absenteeism) or to feel so impaired that even though they went to work or school, their productivity was reduced (presenteeism). We defined absenteeism as a service member reporting being out for at least 14 days in the past 30 days, and we defined presenteeism as a service member being present but impaired for the same period. We defined functional impairment as being moderately, markedly, or extremely impaired as opposed to being mildly impaired or not impaired at all.

Among all respondents, 3.0 percent (CI: 2.4–3.7) reported missing at least 14 days of work in the past 30 days because of their mental or physical symptoms (Figure 3). Absenteeism was highest in the Army (4.9 percent; CI: 3.4–6.4) and lowest in the Coast Guard (1.4 percent; CI: 1.0–1.8). Absenteeism was also higher among enlisted ranks than officers but did not differ significantly between men and women.

Among all respondents, 13.4 percent (CI: 12.3–14.6) reported that their work performance was compromised because of a health condition for at least 14 days in the past 30 days. Presenteeism was highest in the Army (16.8 percent; CI: 14.4–19.3) and lowest in the Coast Guard (7.7 percent; CI: 6.8–8.6). Presenteeism was also higher among the enlisted ranks and warrant officers than among commissioned officers and higher among women than men.

These data suggest that a substantial proportion of active-duty service members suffer from one or more medical vulnerabilities. Physical symptoms were common among service members and consistent with previous research on multiple physical symptoms in the military and in general or clinical populations. The impact of these medical vulnerabilities on overall force readiness, deployability, and organizational efficiency and cost is not well understood, but our survey findings suggest that health-related functional impairment is very common: One in three service members reported that health limitations moderately or markedly affected their capacity to function at work or school, in their social life, or in their family life. Nearly one in seven reported that these impairments affected their performance at work for 14 days in the past month, and 3 percent reported that the impairments caused them to miss work for at least that long.

In short, these data suggest overall productivity loss because of health problems within the ranks. Therefore, the data have significant implications for productivity and suggest a need to address this issue through policies or programs that target the underlying health issues (i.e., chronic conditions, physical symptoms, and functional impairment) that lead to reduced or limited productivity.