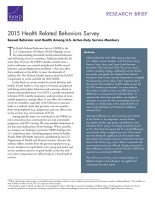 In this brief, we review results for sexual behavior and health. Sexual health is a key aspect of mental and physical well-being and includes behaviors and outcomes related to human immunodeficiency virus (HIV), sexually transmitted infection (STI), healthy pregnancy, and prevention of unintended pregnancy, among others. It can affect the readiness of service members, especially if the behavior or outcome leads to a medical status that prevents a service member from being deployed (e.g., pregnancy), and can affect costs to the services (e.g., for treatment of STIs).

Among specific topics we considered in the HRBS are risky sexual practices, contraceptive use and unintended pregnancy, and HIV testing. We note possible limitations to the data and implications of the findings. Where possible, we compare our findings to previous HRBS findings and U.S. population data, including progress toward Healthy People 2020 (HP2020) objectives established by the U.S. Department of Health and Human Services. Because the military differs notably from the general population (e.g., service members are more likely to be young and male) and service members must be in good health to join the military, these comparisons are offered only as a benchmark of interest.

Among all respondents (excluding those who were not expecting a child or trying to conceive one), 19.4 percent (CI: 18.1–20.7) reported not using birth control during the most-recent vaginal sex (in the past year). Air Force respondents were least likely to report this behavior among the services; enlisted personnel of higher ranks and warrant officers were most likely to do so. There were no statistically significant differences between men and women for this behavior. Married or cohabiting respondents (24.0 percent; CI: 22.3–25.7) were twice as likely to report this behavior as those who were not married or cohabiting (12.2 percent; CI: 10.2–14.1).

Contraceptive Use and Unintended Pregnancy

Service members may have difficulties obtaining contraception when they are deployed. They, like civilian populations, may also use short-acting methods of contraception (e.g., condoms, birth control pills) and forget to use them or use them incorrectly, rather than long-acting contraception with lower unintended pregnancy rates.

The table shows the percentage of service members using each of a variety of contraceptive methods during the most-recent vaginal sex. Two short-acting methods of contraception — condoms and birth control pills — were, by far, the most commonly used.

Unintended pregnancy was experienced or caused by 2.4 percent (CI: 1.9–2.9) of personnel. Marine Corps personnel were the most likely to report this among the services, as were personnel of lower enlisted ranks. Women (4.8 percent; CI: 3.8–5.8) were also more likely to report it than men. The difference between men and women here is probably a result of men having incomplete information about the occurrence of such events. The percentage of unintended pregnancy reported by military women was about the same as that reported by women of reproductive age in the general population (4.5 percent; CI: 4.1–4.9). There were no statistically significant differences between married or cohabiting respondents and those who were not for this outcome.

The Centers for Disease Control and Prevention recommends annual testing for HIV among those at high risk; in addition, DoD Instruction 6485.01 requires screening for all service members at least every two years, and an HIV test result on file within the past 24 months is required to deploy.

Unintended pregnancy rates among military women are about the same as among civilian women but are of particular concern given the potential impact of pregnancy on readiness. Furthermore, sex without use of any contraception is not uncommon: Nearly one in four married or cohabiting service members not trying to conceive failed to use contraception the most-recent time they had sex. Rates of unintended pregnancy might be reduced through greater use of contraception, particularly long-acting forms.