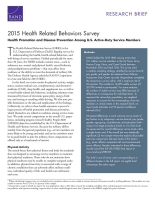 In this brief, we review results for physical activity, weight status, routine medical care, complementary and alternative medicine (CAM), sleep health, and supplement use, as well as several health-related risk behaviors, including sedentary time (measured by hours of electronic game play), energy drink use, and texting or emailing while driving. We also note possible limitations to the data and implications of the findings. Collectively, we refer to these health outcomes as part of a larger process of health promotion and disease prevention, which themselves are related to readiness among service members. We make several comparisons to the overall U.S. population, including progress toward Healthy People 2020 (HP2020) objectives established by the U.S. Department of Health and Human Services. Because the military differs notably from the general population (e.g., service members are more likely to be young and male) and service members must be in good health to join the military, these comparisons are offered only as a benchmark of interest.

The armed forces have physical fitness and body fat standards that are designed to encourage service members to maintain their physical readiness. Those who do not maintain their physical readiness may be unable to complete assigned tasks; in addition, physical inactivity is associated with a range of chronic conditions that can adversely affect military readiness, individual quality of life, and health care utilization and costs.

More than one-third of U.S. adults are obese, increasing their risks for early mortality and several chronic diseases. HP2020 sets objectives for weight status for adults aged 20 or older based on the following Centers for Disease Control and Prevention body mass index (BMI) categories:[3]

It is important to note that BMI is an indirect measure of body fat, and more-muscular service members may have been misclassified as overweight or obese.

Overall, the 2015 HRBS found that 51.0 percent (CI: 49.4–52.6) of service members were overweight, and an additional 14.7 percent (CI: 13.5–15.8) were obese. Although the military is meeting the HP2020 goal for obesity, the high percentage of overweight service members could be cause for concern. However, as noted, very muscular individuals may be incorrectly classified as unhealthy based on standard BMI cutoffs. One-third of active-duty service members were a normal (healthy) weight, and less than 1 percent were underweight. The percentage of service members categorized as obese was highest in the Army (Figure 2) and among senior enlisted personnel (E7–E9). Women were less likely to be obese than men.

The 2015 HRBS asked respondents when they last visited a doctor for a routine checkup (i.e., a general health examination, not an exam for a specific injury, illness, or condition). Current military policy requires service members to receive annually a face-to-face, clinical health assessment, so we estimated that failure to obtain a routine checkup within the previous two years suggests the need for a current medical reassessment. Overall, 93.2 percent (CI: 92.4–94.1) of respondents reported receiving a routine medical checkup in the past two years.

CAM consists of diverse practices (such as chiropractic, biofeedback, and meditation) that are not usually thought of as a traditional medical treatment or therapy modality. Research suggests that CAM use is more common in the military than in the U.S. adult population. The 2015 HRBS asked respondents whether they had used various types of CAM in the past 12 months.

Sleep problems, which are common among military personnel, are a typical reaction to stress and are symptoms of posttraumatic stress disorder, depression, anxiety, and traumatic brain injury. Insufficient sleep is also associated with adverse mental, physical, and cognitive functioning. Side effects of sleep medications used by service members may further limit service member functioning and military health readiness.

The 2015 HRBS asked respondents whether they got as much sleep as they needed, whether they had been moderately or severely bothered by a lack of energy due to poor sleep, and whether they used medications to help with sleep. Most respondents reported getting less sleep than they needed (Figure 3). Nearly one-third said they were bothered by lack of energy due to poor sleep. Those in the Army, Marine Corps, and Navy were more likely to report these answers than service members in the Air Force or Coast Guard. Enlisted service members were less satisfied with their sleep than officers were, and women were less satisfied than men.

The percentage of U.S. adults who report using dietary supplements is increasing, and more than half of adults use at least one. Along with some in the medical and scientific communities, DoD has expressed concern about the safety and effectiveness of supplements; specific concerns include tainted supplements, the lack of scientific evidence for the benefits of supplements, and excessive nutrient and protein intake.

Energy drinks contain caffeine, and caffeine has demonstrated efficacy in operational situations for augmenting physical and cognitive performance. However, the high amount and concentration of caffeine in energy drinks has raised some concerns. Use of caffeine-containing energy drinks has been associated with alcohol consumption (among college students) and increased emergency department visits.

The 2015 HRBS asked respondents how often they drank energy drinks or shots (e.g., Red Bull, Monster, 5-Hour Energy, Power Shots) in the past 30 days. Altogether, 49.0 percent (CI: 47.4–50.6) of respondents reported not using energy drinks in the past month, 7.2 percent (CI: 6.3–8.0) reported doing so daily, 16.8 percent (CI: 15.5–18.1) reported use at least weekly but not daily, and 27.0 percent (CI: 25.5–28.5) reported use at least monthly but not weekly. Use was higher for respondents in the Marine Corps than in the other services, for service members in more-junior pay grades than those in more-senior pay grades (among both officers and enlisted), and for men than women.

Texting or Emailing While Driving

Typing and reading while driving can adversely affect stimulus detection, reaction time, and other capabilities needed for safe driving, thereby contributing to injuries and mortality from motor vehicle accidents. Injuries and accidents associated with texting or emailing while driving, both on and off duty, have a direct influence on personnel health and therefore readiness. The 2015 HRBS asked respondents how many days in the past 30 they texted or emailed while driving a car or other vehicle. Overall, 87.2 percent (CI: 86.1–88.3) of service members reported occasionally (defined as five or fewer days in the past 30) texting or emailing while driving. Doing so regularly (defined as 20 or more days in the past 30) was reported more often by those in lower pay grades (among both officers and enlisted).

Although DoD and the Coast Guard are doing well in several areas related to health promotion and disease prevention, there are a few health outcomes and health behaviors that warrant immediate attention. These include the following:

Finally, the results from the 2015 HRBS suggest that there are certain groups of service members, based on demographics, service branch, and so forth, that may need special attention to prevent negative health outcomes and to improve current health-related behaviors. Tailoring prevention messages for different cultural and demographic groups is a recommended public health strategy. For example, messages that resonate with 20-year-old, junior enlisted service members may not be as salient with 40-year-old officers. Similarly, messages appealing to those in the Army or Marine Corps may not work as well for those in the Air Force.