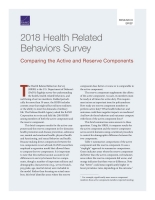 Comparing the Active and Reserve Components

The Health Related Behaviors Survey (HRBS) is the U.S. Department of Defense's (DoD's) flagship survey for understanding the health, health-related behaviors, and well-being of service members. Fielded periodically for more than 30 years, the HRBS includes content areas that might affect military readiness or the ability to meet the demands of military life. The Defense Health Agency asked the RAND Corporation to revise and field the 2018 HRBS among members of both the active component and the reserve component.

This brief compares results for the active component and the reserve component in five domains: health promotion and disease prevention, substance use, mental and emotional health, physical health and functioning, and sexual behavior and health. Because making direct comparisons between the two components is not advised, RAND researchers employed a regression model that allowed them to compare the two components. It is important to note that this method cannot account for all differences in surveys between the two components, though a number of important military and demographic characteristics (e.g., service branch, pay grade, age, marital status) were included in the model. Rather than focusing on actual numbers, this brief identifies areas where the reserve component does better or worse or is comparable to the active component.

This brief summarizes some answers to these questions. Using the HRBS, it compares results for the active component and the reserve component across several domains using a statistical procedure to control for demographic difference between the two components.

The remainder of this brief summarizes differences in each of the five domains.

Reserve component service members reported significantly less binge and heavy drinking and fewer negative consequences associated with drinking than their active component peers. They were also less likely to view the military culture as supportive of drinking. Further, fewer used tobacco products, including traditional cigarettes, e-cigarettes, and smokeless tobacco. Although they were less likely to use prescription drugs (i.e., stimulants, sedatives, and pain relievers) than active component members were, reservists were more likely to report using illicit drugs, especially marijuana. There was no difference between the two components in misuse of prescription drugs.

The response rates for both the active component and reserve component surveys are considered low for survey research. Although low response rates do not automatically mean that survey data are biased, they do increase the possibility of bias. As with any self-report survey, social desirability bias is a possibility, especially for sensitive questions and topics.