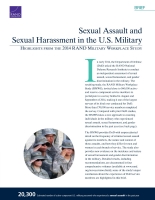 Sexual Assault and Sexual Harassment in the U.S. Military 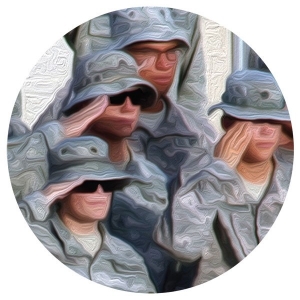 In early 2014, the Department of Defense (DoD) asked the RAND National Defense Research Institute to conduct an independent assessment of sexual assault, sexual harassment, and gender discrimination in the military. The resulting study, the RAND Military Workplace Study (RMWS), invited close to 560,000 active- and reserve-component service members to participate in a survey fielded in August and September of 2014, making it one of the largest surveys of its kind ever conducted for DoD. More than 170,000 service members completed the survey. Compared with prior DoD studies, the RMWS takes a new approach to counting individuals in the military who experienced sexual assault, sexual harassment, and gender discrimination in the past year.

The RMWS provides DoD with unprecedented detail on the frequency of criminal sexual assault against its members, the nature and context of those assaults, and how they differ for men and women in each branch of service. The study also provides new evidence on the prevalence and nature of sexual harassment and gender discrimination in the military. Detailed results, including recommendations, are documented in four comprehensive volumes (available at www.rand.org/surveys/rmws.html); some of the study's major conclusions about the experiences of DoD service members are highlighted in this brief.

20,300 Estimated number of active-component U.S. military personnel who experienced a sexual assault in the past year

An estimated 116,600 active-component service members were sexually harassed in the past year

Nearly all assaults against active-component service members in the past year (90%) took place within a military setting or were perpetrated by military personnel.

An estimated 20,300 of the 1.3 million active-component service members were sexually assaulted in the past year. Approximately 1.0 percent of men and 4.9 percent of women experienced a sexual assault in the past year, or an estimated 10,600 servicemen and 9,600 servicewomen (numbers do not add to 20,300 due to rounding). Among those who were sexually assaulted, 43 percent of women and 35 percent of men experienced penetrative assaults — a higher proportion than was estimated using earlier survey methods. Nearly all assaults against active-component service members in the past year (90 percent) took place within a military setting or were perpetrated by military personnel.

RAND's approach offers greater precision in estimating the number of crimes and MEO violations that have occurred.

The rate of unwanted sexual contact has declined since 2012. 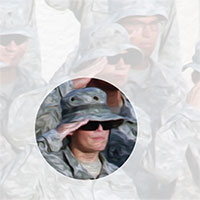 What did the RAND Military Workplace Study (RMWS) measure?

The new RAND survey used the definitions and criteria of sexual assault crimes under Articles 120 and 80 of the Uniform Code of Military Justice — the criminal code that defines what sexual assault is for service members. The survey measures of sexual harassment and gender discrimination are tightly aligned with criteria in DoD Directive 1350.2 on military equal opportunity (MEO) violations.

Compared with past surveys that were designed to measure a climate of sexual misconduct associated with illegal behavior, RAND's approach offers greater precision in estimating the number of crimes and MEO violations that have occurred. However, because our estimates are based on self-reports, some over- or undercounting of these crimes and violations is expected.

Many who report offenses perceived some kind of retaliation. Of active-component women who reported a sexual assault, 52 percent perceived that they experienced professional or social retaliation afterward. Nevertheless, fear of retaliation was not typically cited as the primary reason people did not report the sexual assaults and violations they experienced. More commonly, service members indicated that they did not report a sexual assault because they wanted to forget about it and move on, or because they thought it was not serious enough to report.