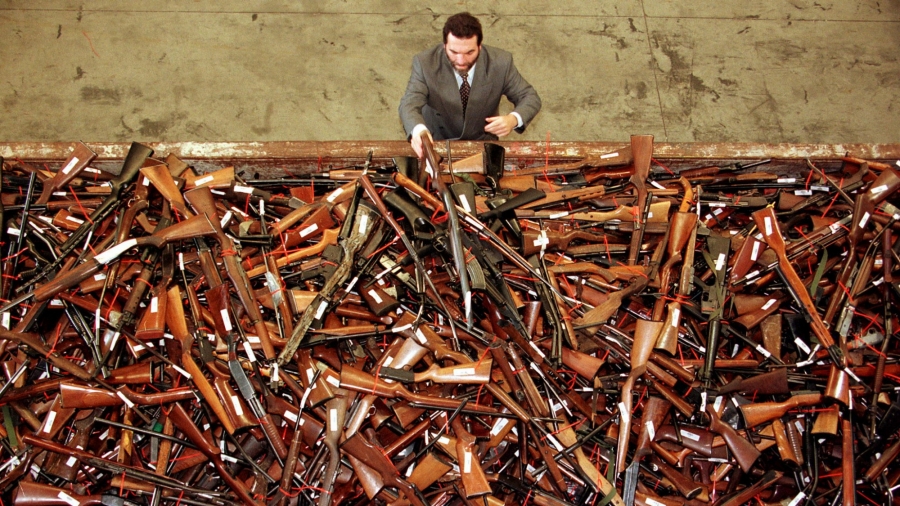 A pile of prohibited firearms that were handed in under the Australian government's buyback scheme, July 1997.

The United States has the world’s highest rate of gun ownership by civilians. Estimates suggest that there are more than 12 firearms for every ten civilians in the country, making U.S. gun ownership per capita more than double that of the country with the second-highest per capita rate—Yemen (according to a 2018 Small Arms Survey analysis of more than 200 countries). The United States also has high rates of violence. According to a 2016 study by Erin Grinshteyn and David Hemenway, homicide rates are six times higher in the United States than in most other developed countries, and firearm homicides account for much of this difference. Grinshteyn and Hemenway also found that, although the United States does not have higher-than-average suicide rates, U.S. rates of firearm suicides are eight times higher than in other developed countries. In addition, unintentional firearm deaths are more than six times more common in the United States than in comparison countries.

Statistics like these raise reasonable questions about whether it is the large number of guns in the United States that elevates U.S. residents’ risk of violent death, or whether people in the United States feel a greater need to arm themselves to defend against an especially violent society. For instance, if gun ownership rates suddenly fell by half, would suicide and homicide rates drop? Or if suicide and homicide rates fell by half, would gun ownership rates drop? To see whether we could shed some light on the answers to these questions, we applied our research review methodology (for identifying evidence of the effects of various state-level gun policies in the United States) to broader questions about how gun ownership or the prevalence of guns in society affects suicide and homicide rates.

Our review of existing research examining the relationship between gun prevalence and either suicide or homicide rates concluded that some of the most compelling evidence for a causal connection comes from the experiences of three countries—Australia, Switzerland, and Israel—where changes in law or policy may have led to marked shifts in gun ownership rates. We examined the available evidence on these countries’ experiences, as well as the wider literature on the effects of the prevalence of gun ownership on suicide and violent crime, using an approach similar to that used for our research syntheses. Specifically, we sought to objectively assess the quality of available evidence that changes in gun prevalence or availability have a causal effect on suicide or violent crime rates. Here, we summarize the findings from the three countries whose experiences we judged as providing some of the best evidence for a causal association between gun ownership and suicide, homicide, or mass shootings. 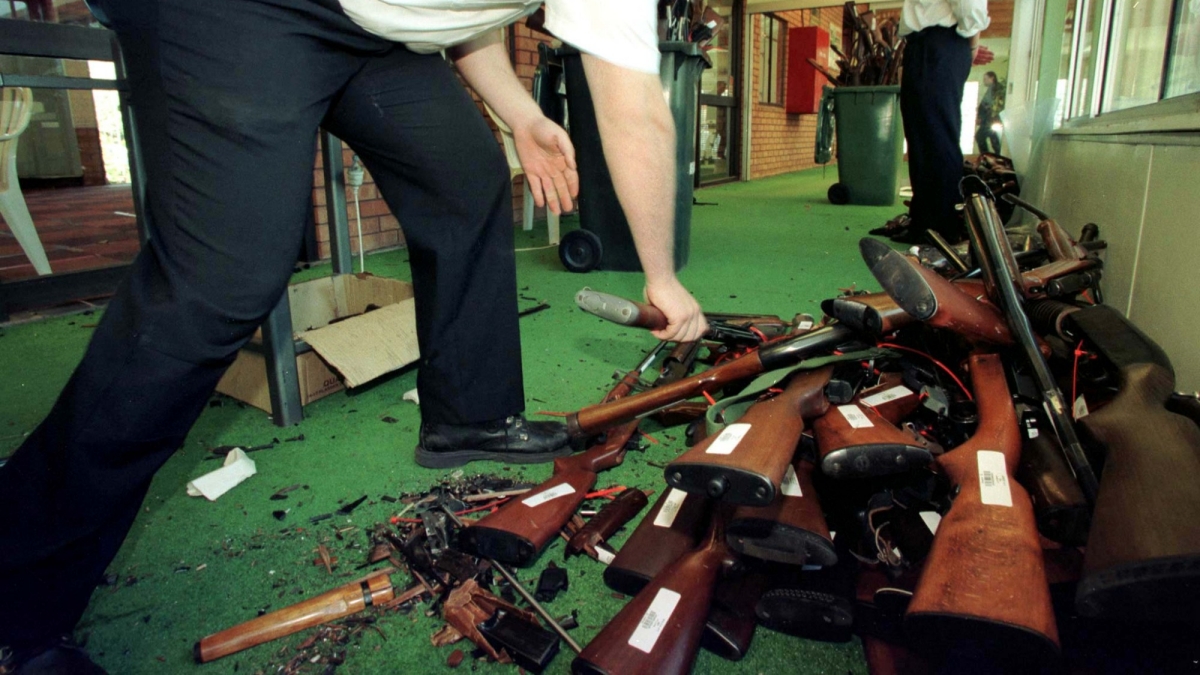 Guns that have just had their barrels crushed in Sydney are stacked after they were handed over on the last day of the Australian gun buyback scheme, September 1997.

Following a 1996 mass shooting in which 35 people in Tasmania, Australia, were killed, Australian states and territories reached the National Firearms Agreement (NFA). Among other changes, this reform banned automatic rifles and many types of semiautomatic rifles, and it imposed new restrictions on conditions of ownership of other firearms. The government offered to purchase newly banned weapons from their owners at market rates for a 12-month period after the NFA took effect. According to a study by Simon Chapman, Philip Alpers, and Michael Jones, Australia had purchased back 695,940 prohibited firearms by August 2001, and during a second buyback in 2003, 68,727 handguns were purchased and destroyed.

Research studies show that suicides, homicides, and mass shootings declined after the NFA was implemented.

Multiple research groups have investigated how these large-scale reductions in the stock of guns have affected rates of suicide, homicide, and mass shootings. All these studies show that suicides, homicides, and mass shootings declined after the NFA was implemented. Whether these declines can be specifically attributed to the NFA or to reduced gun ownership in Australia is less clear, however. We summarize the evidence below:

Thus, there is evidence that the NFA was associated with reductions in gun violence in Australia, but it is not clear from the available research that the NFA was the cause of those reductions. It could have had such an effect, but research studies have not persuasively demonstrated that other causes can be ruled out. In our essay on the NFA, we offer more in-depth discussion about assessing the law’s effects.

A Natural Experiment in Switzerland 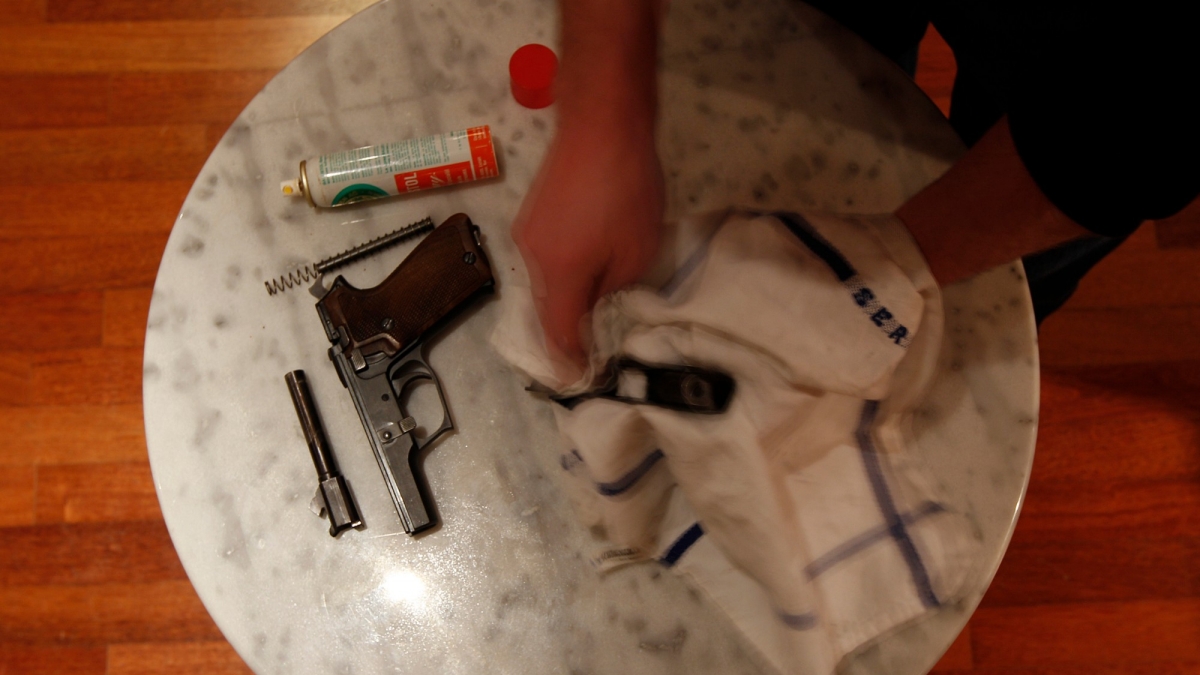 A man checks and cleans his personal army weapon at his house in Zurich.

In 2004, the Swiss military introduced large-scale reforms that reduced the size of the Swiss Army by half; lowered its discharge age from 43 to 33; and adopted new policies that, among other things, increased the cost to service members of purchasing their military guns after separation from the service and introduced a gun license requirement. A 2013 study by Thomas Reisch, Timur Steffen, Astrid Habenstein, and Wolfgang Tschacher hypothesized that the net effects of these changes were to reduce the number of young men in Switzerland with access to guns. They found that suicide rates among men aged 18–43 were lower immediately after the 2004 Army reforms than would have been expected based on the pre-reform trends. Moreover, the declines seemed to be found chiefly among firearm suicides, not most other types of suicide.

One experiment provides suggestive evidence that reductions in gun availability could reduce suicides, but questions can be raised about that conclusion.

This interesting natural experiment provides suggestive evidence that reductions in gun availability could reduce suicides. However, reasonable questions can be raised about whether the availability of guns led to the decline. The authors of the study had no measure of gun availability or prevalence; the effect was not shown to be disproportionately found in recently released service members (who would have been the ones affected by early discharge from the Army or the higher cost of purchasing a service weapon); and older men less likely to have been directly affected by the Army reforms also saw reductions in suicide rates, which were not shown to be significantly different from those found among younger men.

Therefore, this study also provides results consistent with the possibility that reduced access to firearms led to reductions in suicides, but it does not persuasively rule out other explanations for the observed declines in suicide rates. We explore this experiment in more detail in a discussion of the relationship between firearm availability and suicide. 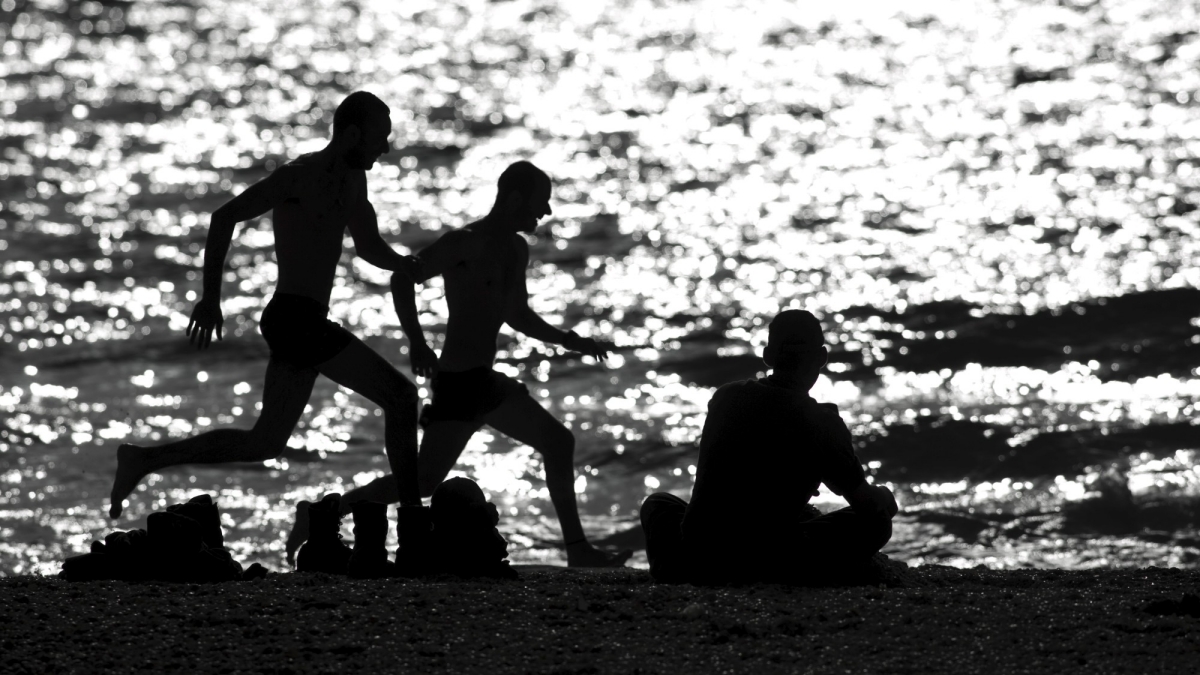 Off-duty Israeli soldiers run on the shore of the Mediterranean Sea.

This study is consistent with the theory that firearm availability is a risk factor for suicide.

This study, too, is consistent with the theory that firearm availability is a risk factor for suicide. However, both firearm and nonfirearm suicide rates (as documented by the World Health Organization in 2017) were falling in Israel over the study period. Thus, the fact that firearm suicides among men aged 18–21 declined by 40 percent may not be distinguishable from declines in firearm suicides in groups that would be less directly affected by the military policy. For example, firearm suicides among Israelis aged 25–29 also fell by 40 percent over this same period, from 10.7 per year to 6.3 per year. On the other hand, the fact that greater reductions in firearm suicide rates among men aged 18–21 were found among weekend suicides rather than weekday suicides does suggest that the Army policy may have influenced suicidal behavior. Whether that involved shifting suicides from the weekend to the weekday or contributed to the ongoing reductions in suicides remains to be investigated. As with the Swiss experience, we delve into the situation in Israel in more detail in our discussion of the association between firearm availability and suicide.

Do Guns Cause Violence and Suicide?

In addition to the foreign studies, we reviewed studies conducted in the United States that demonstrate correlations of gun ownership rates with suicide rates and with violent crime rates. Our assessment of this body of work is that more research is needed before we can make confident assertions that the availability and prevalence of guns directly cause violent deaths.

Although empirical evidence remains ambiguous, there are sufficiently compelling arguments to justify the assumption that gun availability does increase the risk of suicide.

Despite our finding that the empirical evidence remains ambiguous, there are sufficiently compelling theoretical or logical arguments to justify individuals and policymakers choosing to assume that gun availability does increase the risk of suicide. Logically, for instance, if guns were not available, the more than 17,000 accidental firearm injuries and deaths that occur in the country each year would not occur. That is, it is very unlikely that, without guns, a large proportion of these unintentional injuries would still have occurred by other means. In addition, it is clear that guns are especially lethal means of attempting suicide and that suicide attempts are often impulsive acts that may never be repeated should the first attempt fail. Because those who impulsively attempt suicide with a gun rarely get a chance to reconsider their decision, it is reasonable to suspect that if guns are less immediately available to those considering suicide, fewer suicide attempts would result in a fatality. And with more people having the chance to reconsider their decision, suicide fatality rates would also decline. We distinguish this logical—and, in our judgment, reasonably persuasive—argument from what empirical research can currently demonstrate about the net effects of gun prevalence on suicide rates.