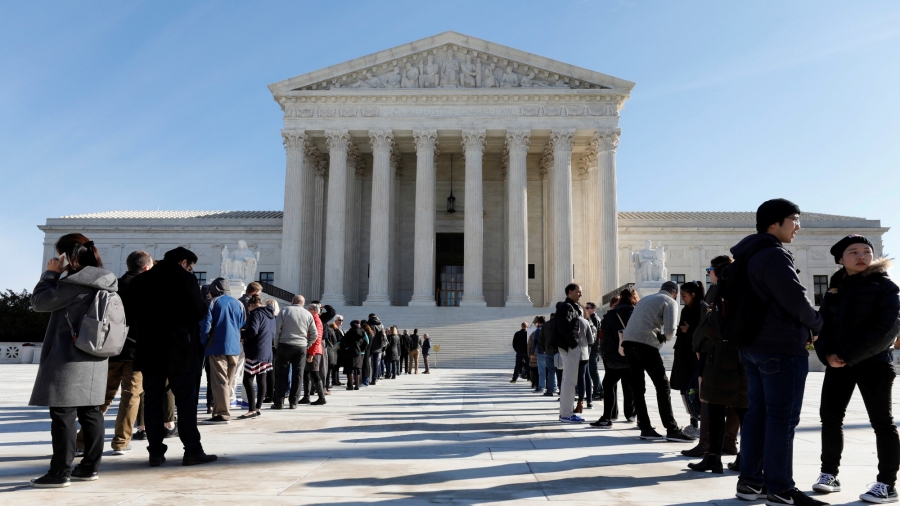 Visitors stand in line outside the U.S. Supreme Court on November 27, 2017, the day the court declined to hear a challenge to Maryland’s 2013 state ban on assault weapons.

In addition to their many uses, guns have symbolic, cultural, and economic importance in the United States. Many Americans value the traditions of hunting, sport shooting, and collecting guns and appreciate the security and protection that they can provide. Many regions rely on hunting as an important driver of the tourism economy, and the wider gun industry employs hundreds of thousands of Americans, including instructors and shooting range operators; hunting equipment suppliers; and manufacturers, distributors, and retailers of firearms and ammunition.

At the same time, each year, many Americans suffer grievous injuries and lose friends and family members in incidents involving firearms. According to vital statistics data reported by the Centers for Disease Control and Prevention, more than 39,700 people died of gunshot wounds in the United States in 2017. Almost two-thirds of these deaths were suicides. According to a 2016 study by Erin Grinshteyn and David Hemenway, those living in the United States are seven times more likely to die by homicide than if they lived in another wealthy country and are 25 times more likely to die in a gun homicide. Indeed, the risk of experiencing gun violence in the United States is so high and so pervasive that even the mass shootings that occur so regularly, and that capture so much attention, account for just one half of 1 percent of all U.S. gun fatalities annually.

There are many reasons why people disagree about how to reduce the harms associated with gun violence, but among the biggest is disagreement about the true effects of gun policies on a range of outcomes.

Virtually no one believes that these levels of violence and sorrow should be tolerated: not gun owners, not gun-rights advocates, and certainly not those who believe guns are a root cause of these problems. But there is passionate disagreement about what should be done. There are many reasons why people disagree about how to reduce the harms associated with gun violence, but among the biggest is disagreement about the true effects of different gun laws and regulations—gun policies—on a range of outcomes. The RAND Gun Policy in America initiative is designed to provide the most-objective information possible about what is and isn’t known about the likely effects of commonly discussed gun laws, to create tools and resources to improve the quality of research in this area, and ultimately to improve the national debate on developing fair and effective gun policies.

Views on gun policies frequently divide along political and partisan lines. Some of this split could be the result of differing values concerning which goals and outcomes are more important (for example, protecting personal liberties or reducing community violence). However, from a survey we conducted of gun policy experts, we found that this is not the primary source of disagreement. That is, disagreements between experts favoring the policy positions of the National Rifle Association and those favoring the positions of the Brady Campaign to Prevent Gun Violence do not stem from different views about the objectives that gun policies should aim to achieve. Instead, experts disagree about what the true effects of different gun policies will be. Both groups prefer policies that they believe will reduce gun violence, but one believes that eliminating gun-free zones, for instance, will accomplish this objective, while the other believes that such a policy would have the opposite effect. This is a disagreement about facts, not about values or objectives.

As Dan Kahan at Yale University and others have shown, disagreements about factual matters concerning gun policy or other science controversies may persist even when credible evidence is available; people may become strongly motivated to reject factual claims that contradict their or their social groups' long-held beliefs, especially when those beliefs have become central to the group's identity. Nevertheless, the fact that gun policy debates appear to be grounded in disagreement about the effects of policies rather than about their objectives suggests an important role for the scientific study of gun laws, especially where evidence is currently weak. However, our review of thousands of published studies (originally released in 2018 and updated in 2020) showed that there is still much to learn about the effects of gun policies. Indeed, after restricting our review to studies designed to measure the causal effects of policies, we found scientific evidence for relatively few of the more than 150 effects we examined.

Furthermore, many of the possible effects of gun policies that are raised in policy debates have only rarely—or never—been studied rigorously. These understudied and unstudied outcomes in our review included the effects of laws on police shootings of civilians, on a gun owner’s ability to use his or her weapon defensively, and on participation in hunting and sport shooting. Despite the importance of these outcomes to influential stakeholders in gun policy debates, little scientific research has been conducted to clarify how these outcomes would likely be affected by gun laws (read more in our essay on the scientific evidence for the effects of gun policies).

The fact that gun policy debates appear to be grounded in disagreement about the effects of policies rather than about their objectives suggests an important role for the scientific study of gun laws.

Even for outcomes that have been better studied, such as suicides, homicides, and unintentional injuries, often only one or two studies met our criteria for providing evidence of a policy’s effects, and these studies often provided inconclusive, contradictory, or otherwise limited evidence. Nevertheless, we did find that the weight of available evidence suggests that some policies have specific effects. For instance, we concluded that there is credible evidence that child-access prevention laws—which require guns to be stored safely—have positive, measurable benefits in reducing unintentional and intentional self-injuries and deaths among young people. However, the effects of these laws on defensive gun use (one of the principal objections raised against child-access prevention laws) have not been evaluated rigorously, leaving policymakers without a complete picture of the laws’ total possible effects.

The comparatively modest scientific evidence available on most gun policies does not, of course, mean that these policies are ineffective. It may be, for example, that the policies do have the intended effects on those seeking to acquire a new firearm, but because new firearms represent such a small proportion of the total stock of guns held by civilians in the United States—estimated by the Small Arms Survey to be more than 393 million firearms in 2017—the effects are hard to discern. For example, laws designed to change who may buy new firearms, which guns they may buy, or how gun sales occur could predictably have only a small effect on, for example, homicide rates, which may be affected much more by the existing stock of firearms. So, although small effects are especially difficult to identify with the data and methods common in this field, that does not mean the effects are unimportant: Even a 1-percent reduction in homicides nationally would correspond to approximately 1,500 fewer violent deaths over a decade.

Beyond the fact that it is often difficult to identify the true effects of gun laws using available data and research methods, it is also true that gun policy, as a whole, is understudied. This is partly a result of congressional appropriations language (the so-called Dickey Amendment, renewed continuously since its introduction in 1996) that chilled U.S. government investment in gun policy research until December 2019, when Congress appropriated $25 million to study gun violence and prevention. Indeed, in recent decades, the U.S. government has spent far less on gun policy research than it has on research involving causes of similar levels of mortality in the United States, such as traffic accidents or sepsis, meaning that published studies on gun policy are correspondingly rare (as detailed in a 2017 study by David Stark and Nigam Shah and in another by Ted Alcorn).

Researchers review the challenges to the scientific study of gun policies and recommend ways to improve this body of research. »

There are other obstacles to researching the effects of gun policies, however, such as the lack of reliable information about when states implemented different laws and the differences among researchers for classifying a specific law or provision as belonging to one or another group of gun policies. We found an exception to this problem in the available research for shall-issue concealed-carry (or right-to-carry) laws; we suspect this is because the original developers of a data set on state implementation of shall-issue laws made their data set available to other researchers, who have further improved it and made it available for others to use. Perhaps partly as a result of the widespread availability of this data set, we found vastly more research on shall-issue concealed-carry laws than on any other gun policy. Indeed, while we identified 51 studies that examined the effects of concealed-carry laws using rigorous methods, the next most commonly studied policy (background checks) had just 18 studies, and the next beyond that (licensing and permitting requirements) had only 12.

Faced with the difficulty of assembling reliable historical information on state implementation of gun policies, we developed a database of state gun laws that covers 1979 to 2019, and further updates and expanded policies are on the horizon. The database cites and quotes every law we have categorized, indicating the date it became effective and whether it implemented, modified, or repealed a policy. We have now deployed the database as an open-source resource that others can use for their own research, and to increase its breadth and accuracy, other researchers can and do contribute. This is one of several products we have developed as part of the Gun Policy in America initiative that should foster innovation and improvement in gun policy research.

In undertaking the RAND Gun Policy in America project, we hope to begin to build consensus around a shared set of facts about gun policy by demonstrating where scientific evidence is accumulating, developing new estimates and resources for use by other researchers, and highlighting areas where investment in research by the U.S. government, foundations, and philanthropists could produce more and better information and make important contributions to establishing fair and effective gun policies in the United States.