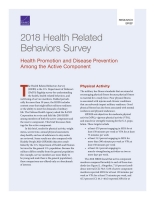 Health Promotion and Disease Prevention Among the Active Component

In this brief, results for physical activity, weight status, screen time, annual physical assessment, sleep health, and use of substances to stay awake are reviewed. Some results are also compared with Healthy People 2020 (HP2020) objectives established by the U.S. Department of Health and Human Services for the general U.S. population. Because the military differs notably from the general population (for example, service members are more likely to be young and male than is the general population), these comparisons are offered only as a benchmark of interest.

Nearly 40 percent of the general U.S. population is classified as obese, increasing their risk for early mortality and several chronic diseases. HP2020 sets objectives for weight status for adults aged 20 or older based on the following Centers for Disease Control and Prevention body mass index (BMI)[1] categories.

It is important to note that BMI is an indirect measure of body fat, and more-muscular service members may have been misclassified as overweight or obese.

Overall, the 2018 HRBS found that, among active component members at least 20 years of age, 33.3 percent (CI: 32.1–34.5) were of normal weight. This is roughly comparable to the HP2020 goal for persons at least 20 years of age (see Figure 2). In addition, 15.1 percent (CI: 14.2–15.9) were obese, with the Navy most likely to have obese members. Although the military is meeting the HP2020 goal for obesity, the high percentage of overweight service members could be cause for concern. However, as noted, very muscular individuals may be incorrectly classified as overweight or obese based on standard BMI cutoffs (see Figure 2).

Screen time—time spent looking at a desktop or laptop computer, television, smartphone, tablet, or other handheld device or gaming system—is generally a sedentary behavior. As such, it is associated with a greater risk of obesity and mortality. Indeed, research shows that screen time is a risk factor for many cardiometabolic diseases and mortality, independent of time spent exercising.

Routine medical exams are used to identify asymptomatic illnesses and provide early intervention and encourage healthy behavior. These exams have been shown both to save lives through early detection of cancer and chronic conditions and to save money. The military requires that every service member complete an annual face-to-face medical assessment. These are called Periodic Health Assessments, and they are also used to evaluate individual readiness to deploy.

The 2018 HRBS asked respondents how much sleep they got on average in a 24-hour period over the past 30 days, how sleep affected their energy levels, and whether they took any prescription or over-the-counter medications to aid sleep. Most respondents reported getting less sleep than HP2020 recommends, with every service falling short of the HP2020 goal of 72.8 percent (Figure 3). In addition, 27.5 percent (CI: 26.3–28.6) reported moderate to severe lack of energy due to poor sleep, and 8.2 percent (CI: 7.5–8.8) reported using prescription or over-the-counter sleep medications at least three days per week over the previous 30 days.

Use of Substances to Stay Awake

Energy supplements in the form of caffeinated beverages, over-the-counter medications, and prescription medications can boost endurance and assist with anaerobic activities. They can also have negative consequences, such as sleep loss, anxiety, and palpitations.

The military is meeting HP2020 goals for normal weight. One reason it may be doing so is the prevalence of physical activity among members: Most service members exceed HP2020 goals for physical activity and strength training. Although many service members are obese by HP2020 standards, it is an open question as to how well BMI reflects physical health and conditioning for military members. As part of the revisions to physical fitness standards, DoD and the Coast Guard should consider whether BMI is an appropriate measure of weight for service members.

Adequate sleep is an ongoing concern for service members. Difficulty sleeping and fatigue could adversely affect the readiness of service members. In addition to short-term effects on performance, poor sleep may have long-term effects on physical and mental health. This is especially important to consider in the context of tasks that require quick decisionmaking or sustained attention, both of which can be adversely affected by fatigue and insufficient sleep. DoD and the Coast Guard should make efforts to educate service members on the importance of sleep.

An annual checkup is required for all service members, but many reported not having had one in the previous year. Emphasizing these assessments represents an opportunity to address sleep and weight issues among service members and, thus, could improve the health of the force.

The sampling frame used a random sampling strategy stratified by service branch, pay grade, and gender. The overall weighted response rate for the survey was 9.6 percent, yielding a final analytic sample of 17,166 responses. Imputation was used to address missing data, a statistical procedure that uses the available data to predict missing values. To represent the active component population, RAND researchers weighted responses to account for the oversampling of service members in certain strata. In this research brief, point estimates and 95-percent CIs are reported.[3]