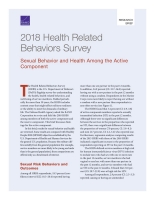 Sexual Behavior and Health Among the Active Component

In this brief, results for sexual behavior and health are reviewed. Some results are compared with Healthy People 2020 (HP2020) objectives established by the U.S. Department of Health and Human Services for the general U.S. population. Because the military differs notably from the general population (for example, service members are more likely to be young and male than is the general population), these comparisons are offered only as a benchmark of interest.

Among all HRBS respondents, 19.3 percent (confidence interval [CI]: 18.3–20.4) reported having more than one sex partner in the past 12 months. In addition, 34.9 percent (CI: 33.7–36.0) reported having sex with a new partner in the past 12 months without using a condom. Respondents in the Marine Corps were more likely to report having sex without a condom with a new partner than respondents in any other service (see Figure 1).

The HRBS found that 3.4 percent (CI: 2.9–3.8) of active component members reported a sexually transmitted infection (STI) in the past 12 months. Although there were no significant differences between the services in the proportion who reported an STI, there was a significant difference between the proportion of women (7.0 percent, CI: 5.8–8.1) and men (2.7 percent, CI: 2.2–3.2) who reported one. Furthermore, regression analyses comparing results of the 2015 HRBS with those of the 2018 HRBS indicated a significant increase in the proportion of respondents reporting an STI in the past 12 months.

In 2016, DoD issued a memorandum (DHA-IPM 16-003) establishing comprehensive standards of care regarding methods of contraception and counseling on methods of contraception. These standards adopt the practice recommendations of the Centers for Disease Control and Prevention (CDC) as the clinical practice guidelines for the military. The HRBS focused on service members' contraceptive use in the past 12 months at the time of their most-recent vaginal sex and at the time they experienced or caused an unintended pregnancy.

The most commonly used methods among HRBS respondents were condoms and birth control pills (see Table 1). Long-acting contraception, such as an intrauterine device (IUD), has been associated with substantially lower unintended pregnancy rates. Long-acting methods are more effective, in part, because they do not require users to remember to use them or to use them correctly, as do some other methods. The most commonly used long-acting method was an IUD.

HP2020 has a goal that 69.3 percent of women 20 to 44 years of age use a most effective or moderately effective method of contraception (sterilization or use of a contraceptive implant; IUD; birth control pills, shots, patch, or ring; or a diaphragm). Data from the National Survey of Family Growth indicate that between 2015 and 2017, among all U.S. women ages 20–44 who were not already pregnant or trying to become pregnant, 60.2 percent (CI: 57.4–63.0) used a most-effective or moderately effective method of contraception. The HRBS found that among servicewomen 20 to 44 years of age, 65.0 percent (CI: 62.8–67.2) used such a method at their most-recent vaginal sex in the past 12 months.

An unintended pregnancy while deployed presents challenges for servicewomen and operational difficulties that can be a threat to force lethality and readiness. The 2016 National Defense Authorization Act required that servicewomen have access to comprehensive counseling on the full range of contraceptive methods at medical visits before deployment and during deployment. The 2017 National Defense Authorization Act directed that information be obtained on the experiences of service members in accessing family planning services and counseling. DoD also requires that contraceptive counseling be delivered at annual physical health assessments as well as at predeployment and during-deployment health care visits.

The CDC recommends annual testing for HIV among those at high risk and suggests that men who have sex with men consider testing every three to six months. DoD requires HIV screening at least every two years, and an HIV test result within the past 24 months must be on file for a service member to deploy.

Substantial proportions of service members engage in each of several sexual risk behaviors, including sex with multiple partners and, especially, sex with a new partner without use of a condom. In addition, the HRBS indicates a significant increase in recent years in STI prevalence. DoD and the Coast Guard should ensure that condoms are easily available to service members regardless of location and at no or reduced cost. Evidence from school-based condom availability programs indicates that these programs result in increased use of condoms and decreased rates of STIs without promoting sexual activity or increasing numbers of sex partners. DoD and the Coast Guard should also consider implementing regular testing for STIs, especially among women. Servicewomen were significantly more likely than men to report an STI in the past 12 months, and there are links between untreated chlamydia and infertility among women.

DoD and the Coast Guard should also seek to increase the consistent and effective use of contraception. Under the new contraceptive guidelines adopted by DoD, IUDs and implants are to be considered first-line methods of contraception. Providers and service members, however, might need additional training and education about the benefits of the most-effective contraceptive methods, with the caveat that these methods may not be appropriate for all women.

Efforts are particularly needed to increase the proportion of personnel who receive predeployment contraceptive counseling. Although we cannot be certain why many service members do not report receiving contraceptive counseling prior to deployment, it is possible that these members and their providers see the counseling as less relevant to their situations. Educational efforts should make clear that DoD directives to provide contraceptive counseling are relevant for all personnel, including those who are not currently sexually active or do not intend to be during deployment; those who identify as lesbian, gay or bisexual; and those who intend to have children in the near future. Sexual activity may be unplanned, hormonal contraceptives can be used for reasons other than birth control, and long-acting methods of contraception, such as IUDs and implants, are reversible.

Finally, DoD and the Coast Guard could increase annual testing for HIV infection among those at high risk through better screening during the annual Periodic Health Assessment (PHA). Although the current form for the PHA asks pertinent questions, it is not clear whether information on various contributors to risk is combined to detect those in the highest risk category, nor is it clear whether certain risks (e.g., men who have sex with men) or combinations of risks should consistently trigger more frequent (annual or biannual) testing for HIV infection.

The sampling frame used a random sampling strategy stratified by service branch, pay grade, and gender. The overall weighted response rate for the survey was 9.6 percent, yielding a final analytic sample of 17,166 responses. Imputation was used to address missing data, a statistical procedure that uses the available data to predict missing values. To represent the active component population, RAND researchers weighted responses to account for the oversampling of service members in certain strata. In this research brief, point estimates and 95-percent CIs are reported.[4]