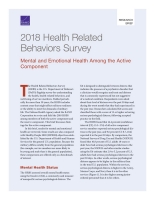 Mental and Emotional Health Among the Active Component

In this brief, results for mental and emotional health are reviewed. Some results are also compared with Healthy People 2020 (HP2020) objectives established by the U.S. Department of Health and Human Services for the general U.S. population. Because the military differs notably from the general population (for example, service members are more likely to be young and male than is the general population), these comparisons are offered only as a benchmark of interest.

The HRBS assessed overall mental health status using the Kessler-6 (K6), a commonly used measure of nonspecific serious psychological distress. The K6 is designed to distinguish between distress that indicates the presence of a psychiatric disorder that a clinician would recognize and treat and distress that is commonly experienced but not suggestive of a medical condition. Respondents were asked about their level of distress over the past 30 days and during the worst month that they had experienced in the past year. Researchers calculated K6 scores and classified those with a score of 13 or higher as having serious psychological distress, following accepted practice in the field.

Exposure to traumatic events, combat in particular, is a well-known hazard of military service. PTSD can contribute to military attrition, absenteeism, and misconduct. The 2018 HRBS measured PTSD with a brief screening measure that asked respondents whether they had experienced a traumatic event in their lifetimes and, if so, whether they had experienced symptoms characteristic of PTSD in the past 30 days. Responses to the screening measure were used to identify respondents with probable PTSD, meaning that there was a high likelihood of them having PTSD based on endorsement of hallmark symptoms. Of note, this does not mean that a clinician had made or would make a formal PTSD diagnosis.

Anger and aggression were frequently reported among combat veterans. Angry or aggressive behavior could result in military personnel physically harming themselves or others, could lead to domestic violence and other illegal acts, and could adversely affect military readiness.

Physical assault is associated with a range of negative consequences, including PTSD and other psychological problems. Reducing physical assaults from 21.3 per 1,000 population to 19.2 per 1,000 is an HP2020 objective.

Suicide rates have increased in most U.S. states in recent years. In 2017, there were 14.0 suicide deaths per 100,000 population; reducing this rate to 10.2 per 100,000 is an HP2020 objective.[2] Reports of increased rates of suicide among active component military personnel have garnered considerable attention and have spurred significant investments into research and prevention efforts. Assessing service members' experiences with suicidal ideation and behaviors is critical for informing these efforts.

The 2018 HRBS found that, in the past 12 months, 8.3 percent (CI: 7.5–9.0) of all active component members endorsed thoughts of suicide, 2.7 percent (CI: 2.3–3.2) reported suicide plans, and 1.2 percent (CI: 0.9–1.6) reported a suicide attempt. These rates are higher than those for the general population. The 2018 NSDUH found that, among all adults 18 or older, 4.3 percent endorsed thoughts of suicide, 1.3 percent endorsed suicide plans, and 0.6 percent reported a suicide attempt. Within the active component, suicide ideation in the past 12 months is more common in the Army, Marine Corps, and Navy than it is in the Air Force and Coast Guard (Figure 3).

Among all respondents, 6.8 percent (CI: 6.2–7.5) reported unmet need for mental health treatment in the past 12 months. Respondents with perceived unmet need included those receiving no care as well as those who received some care but indicated that they needed more or different care than they received.

The HRBS asked two groups of respondents why they did not seek mental health treatment. The first group was those who indicated a perceived need for treatment that they did not receive. The second was those who scored 8 or above on the K6 scale, indicating at least moderate distress, but who also did not receive mental health treatment. The most common reason cited by these two groups of respondents for not seeking mental health care was not thinking it was needed; 53.7 percent (CI: 50.2–57.3) gave this reason. This is consistent with research on civilian populations suggesting that low perceived need is the most common reason that people with mental health problems do not seek care.

Several other commonly cited reasons for not seeking mental health care—"It would have harmed my career," "Members of my unit might have less confidence in me," "My supervisor/unit leadership might have a negative opinion of me or treat me differently"—relate to potential adverse professional consequences of seeking care. The HRBS asked participants whether they thought seeking counseling or mental health treatment through the military would damage their military career. Overall, 34.2 percent (CI: 33.1–35.4) said that it would.

About half of active component members also reported recent angry or aggressive behaviors. About one-tenth indicated experiencing unwanted sexual contact since joining the military, with nearly one-third of women indicating that they had experienced unwanted sexual contact. About one in 20 active component members indicated experiencing a physical assault while in the military.

About one in 12 active component members reported having thoughts of suicide in the past year, a figure nearly twice as high as that in the general population. The military has made a substantial investment in seeking to understand and prevent suicide among service members; additional efforts should determine whether different prevention strategies might be needed for different subgroups of service members (e.g., by level of risk). The military should also gather should more information on early precursors to suicide to improve prevention efforts.

The sampling frame used a random sampling strategy stratified by service branch, pay grade, and gender. The overall weighted response rate for the survey was 9.6 percent, yielding a final analytic sample of 17,166 responses. Imputation was used to address missing data, a statistical procedure that uses the available data to predict missing values. To represent the active component population, RAND researchers weighted responses to account for the oversampling of service members in certain strata. In this research brief, point estimates and 95-percent CIs are reported.[5]