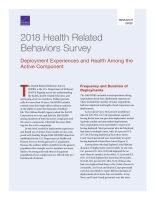 Deployment Experiences and Health Among the Active Component

In this brief, results for deployment experiences and health are reviewed. Some results are also compared with Healthy People 2020 (HP2020) objectives established by the U.S. Department of Health and Human Services for the general U.S. population. Because the military differs notably from the general population (for example, service members are more likely to be young and male than is the general population), these comparisons are offered only as a benchmark of interest.

Deployment and Substance Use

Recent deployers and non–recent deployers did not differ significantly in their e-cigarette use; in substance use (excluding marijuana); and in misuse of prescription drugs, stimulants, sedatives, and pain relievers.

Deployment and Mental and Emotional Health

The HRBS asked respondents about a variety of mental health indicators. It assessed overall mental health status using the Kessler-6 (K6), a commonly used measure of nonspecific serious psychological distress. The K6 is designed to distinguish between distress that indicates the presence of a psychiatric disorder that a clinician would recognize and treat and distress that is commonly experienced but not suggestive of a clinical condition. The HRBS also included items to indicate probable posttraumatic stress disorder (PTSD) and items on sleep quality.

The difference between the two groups in levels of serious distress in the past 12 months, however, was not significant. Furthermore, recent deployers did not differ significantly from non–recent deployers in psychological distress over the past 30 days, probable PTSD, or sleep quality.

The HRBS asked whether respondents had any bodily pain symptoms in the past 30 days, asked whether they had any indicators of traumatic brain injury in the past 12 months or postconcussive symptoms in the past 30 days, and asked them to provide self-ratings of health. For all of these, there were no significant differences between recent deployers and others. (For more information on physical health characteristics of the overall force, see the brief on physical health and functional limitations for the active component.)

The HRBS provides insight on how deployment is associated with active component service members' physical and mental health outcomes and propensity for risk behaviors. Understanding this association is important given that service members often deploy more than once in their careers, and that the negative consequences for health and health behaviors that result from one deployment could impact readiness for future deployments.

Most 2018 HRBS respondents had experienced at least one deployment since joining the military. Exposure to combat trauma was also common. Problematic alcohol use, cigarette smoking, and marijuana use were more common among those who had recently deployed. Use of other drugs and prescription drug misuse was far less common, with no difference between recent deployers and non–recent deployers.

The sampling frame used a random sampling strategy stratified by service branch, pay grade, and gender. The overall weighted response rate for the survey was 9.6 percent, yielding a final analytic sample of 17,166 responses. Imputation was used to address missing data, a statistical procedure that uses the available data to predict missing values. To represent the active component population, RAND researchers weighted responses to account for the oversampling of service members in certain strata. In this research brief, point estimates and 95-percent CIs are reported.[1]