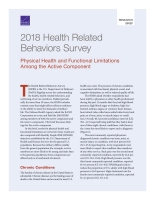 Physical Health and Functional Limitations Among the Active Component

In this brief, results for physical health and functional limitations are reviewed. Some results are also compared with Healthy People 2020 (HP2020) objectives established by the U.S. Department of Health and Human Services for the general U.S. population. Because the military differs notably from the general population (for example, service members are more likely to be young and male than is the general population), these comparisons are offered only as a benchmark of interest.

The HRBS asked whether respondents had been told by a physician or other health professional during the past 12 months that they had high blood pressure; high blood sugar or diabetes; high cholesterol; asthma; angina or coronary heart disease; heart attack (also called myocardial infarction); back pain; or a bone, joint, or muscle injury or condition. Overall, 40.3 percent (confidence interval [CI]: 39.1–41.5) reported being told that they had at least one of these eight chronic conditions, with those in the Army the most likely to report such a diagnosis (Figure 1).

Coast Guard respondents were more likely to report high cholesterol than members of any other service, though the prevalence of high cholesterol for each service was below the HP2020 goal of 13.5 percent. Each of the other chronic conditions covered by the HRBS was reported by less than 5 percent of respondents.

An estimated 34 percent of individuals in the general population reported at least one frequent physical symptom, and one-third of physical symptoms were medically unexplained.[1] The presence of multiple physical symptoms is associated with greater rates of depression, anxiety, substance use disorders, and medical service use.

HRBS respondents completed a symptom checklist comprising eight common physical symptoms: stomach or bowel problems; back pain; pain in the arms, legs, or joints; headaches; chest pain or shortness of breath; dizziness; feeling tired or having low energy; and trouble sleeping. Respondents were asked how much they were bothered by each of these symptoms in the past 30 days.

Military service members are at risk for experiencing a range of physical injuries. Some factors potentially related to injury, such as physical training, are common in the military. Other potential contributors include vehicle crashes and sports injuries. Deployment also increases the risks of certain types of injury. These and other factors may place service members at increased risk for a traumatic brain injury (TBI).

Overall, 26.9 percent (CI: 25.8–28.0) of HRBS respondents reported an injury in the past year. Injury rates were higher in the Army and Marine Corps than they were in the Air Force, Navy, and Coast Guard. Across all services, 6.1 percent of service members (CI: 5.4–6.7) screened positive for mTBI, 0.2 percent (CI: 0.1–0.4) screened positive for moderate to severe TBI, and 4.2 percent (CI: 3.6–4.7) reported postconcussive symptoms. Respondents in the Army, Marine Corps, and Navy were more likely to report mTBI or postconcussive symptoms than were those in the Air Force or Coast Guard.

In addition to reporting on physical symptoms, service members were asked to self-report their overall physical health. Such measures have been shown to be valid measures of physical and emotional health and to predict all-cause mortality. Service members were asked to classify their health as excellent, very good, good, fair, or poor. Altogether, 52.3 percent (CI: 51.1–53.6) classified their health as excellent or very good.

Chronic conditions and physical limitations can affect individuals' use of health care, quality of life, and ability to carry out normal daily responsibilities. This can result in reduced productivity and missed days of school or work.

The HRBS assessed absenteeism (lost work or school days because of health symptoms) and presenteeism (days present at work or school but with performance compromised because of health symptoms). Respondents were asked how many days in the past 30 their mental or physical symptoms caused them to miss school or work or to feel so impaired that, even though they went to school or work, their performance was compromised.

While most HRBS respondents reported excellent or very good health, the HRBS suggests that a substantial proportion of the active component has one or more physical vulnerabilities. Two in five reported at least one chronic condition, particularly trouble sleeping; bone, joint, or muscle injury; and back pain. High levels of pain may be unsurprising given the physical demands associated with military service. Nevertheless, the potential for pain to reduce physical functioning or lead to health risks associated with prescription analgesic use, including use of opioids, makes this a potential area of military readiness concern. DoD and the Coast Guard should continue to place policy and program attention on both preventing injury and pain and emphasizing a variety of nonpharmacologic pain management approaches.

On average, absenteeism appears to be fairly low, but presenteeism averages more than two days per month. Having reduced productivity across multiple days might have more of a negative impact on readiness than one missed day that allows for fuller recovery. DoD and the Coast Guard should address the underlying mental and physical health causes of absenteeism and presenteeism, including ways to reduce associated lost productivity.

The sampling frame used a random sampling strategy stratified by service branch, pay grade, and gender. The overall weighted response rate for the survey was 9.6 percent, yielding a final analytic sample of 17,166 responses. Imputation was used to address missing data, a statistical procedure that uses the available data to predict missing values. To represent the active component population, RAND researchers weighted responses to account for the oversampling of service members in certain strata. In this research brief, point estimates and 95-percent CIs are reported.[4]