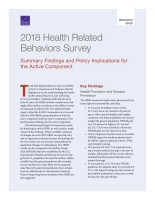 Summary Findings and Policy Implications for the Active Component

This brief presents high-level summary results for broad topics of the HRBS, as well as policy implications of key findings. Where available, estimates of changes since the 2015 HRBS are reported; they rely on regression estimates because the findings for the two surveys are not directly comparable given significant changes in methodology. The HRBS results are also compared with Healthy People 2020 (HP2020) objectives established by the U.S. Department of Health and Human Services for the general U.S. population. Because the military differs notably from the general population (for example, service members are more likely to be young and male than is the general population), these comparisons are offered only as a benchmark of interest. Ways of improving future iterations of the HRBS are also suggested.

The HRBS examined use of alcohol, tobacco and nicotine products, marijuana and synthetic cannabis, other drugs, and prescription drugs.

The HRBS examined sexual risk behaviors, sexually transmitted infections (STIs) and unintended pregnancies, use of and access to contraception, and human immunodeficiency virus (HIV) testing in the past 12 months.

The HRBS estimated the percentage of servicemen and servicewomen who are lesbian, gay, or bisexual (LGB) and identified key information about the health-related behavior and health status of LGB service members.

The HRBS examined the frequency and duration of deployments (both combat and noncombat), combat trauma experience, and deployment experiences and health.

Given methodological changes in the 2018 HRBS, it was not possible to make direct comparisons with earlier versions of the survey. The research team did, however, employ a regression model that allowed them to compare the 2015 and 2018 versions of the HRBS. This approach cannot account for all differences across the two surveys, but when 2015 and 2018 survey questions are the same, it can identify changes that may be of interest to policymakers.

Sleep health remains a significant military health issue: Most active component members did not report sufficient amounts of sleep, and many described their sleep as bad. DoD and the Coast Guard should educate service members on normal sleep requirements and the consequences of insufficient sleep on performance and health.

An annual checkup is required for all service members, but many did not report having one in the past year. Increasing the proportion who meet this requirement could increase opportunities to address individual health issues and the overall health of the force.

Alcohol misuse remains a persistent and serious threat to military readiness. It has been linked to accidental injury, sexual and physical assault and victimization, intimate partner violence, and physical and mental health problems, including suicide. DoD and the Coast Guard must better understand the culture and climate surrounding alcohol use and seek to implement evidence-based approaches to preventing excessive use.

Reducing use of tobacco and nicotine products is a high priority given the likely long-term health consequences of their use. Intervention and prevention approaches will likely need to be informed by current evidence-based approaches used with civilians and to pay particular attention to beliefs related to e-cigarettes as a replacement for combustible cigarettes.

Serious psychological distress was common among service members and remains a significant threat to military readiness. Studies have associated serious psychological distress with a variety of problems, including reduced work function. The widespread perception that mental health treatment is unhelpful and likely to damage one's military career is perhaps the most important obstacle to addressing this problem.

Despite substantial investments to understand and prevent suicide among service members, further efforts are needed to address this problem. Increases in suicide ideation underscore the urgent need to identify early precursors to suicide and improve prevention efforts.

DoD and the Coast Guard should explore the underlying causes of related absenteeism and presenteeism, as addressing these may be an effective way to reduce lost productivity. Pain is a very common complaint in the military, and DoD and the Coast Guard should continue to seek to reduce pain (e.g., through efforts to reduce musculoskeletal and overuse injuries) and to address pain in the ranks by increasing access to high-quality pain care, particularly to common nonpharmacological approaches.

To address escalating STI rates, DoD and the Coast Guard should consider regular testing for STIs and ensure that condoms are easily available through TRICARE and to service members regardless of location and at no or reduced cost. Such programs can result in increased use of condoms and decreased STI rates without promoting sexual activity or increasing numbers of sex partners. Improvements to the Periodic Health Assessment and process targeting high-risk personnel could enable annual HIV testing and improved prevention for this group.

Broadly targeted health promotion efforts by DoD and the Coast Guard should include LGB-specific considerations, as appropriate, recognizing that LGB individuals are part of the service. Addressing LGB health disparities is unlikely to require the development of programs or policies targeted specifically to this group.

DoD and the Coast Guard should also address the unique mental health needs of LGB personnel. Campaigns to reduce stigma surrounding mental health service use should include messaging and images relevant to LGB personnel and should be tested for acceptability and perceived effectiveness.

Sexual health disparities between LGB and non-LGB populations could be reduced through education of military health providers. Incorrect assumptions about bisexual personnel based on the gender of their current sexual partners might lead to incomplete or incorrect counseling regarding STI prevention.

Implications for Future Iterations of the HRBS

Consider the Use of Survey Incentives

Although the HRBS is now administered completely by internet, its response rates remain a continuing concern. Existing research has shown that incentives can increase response rates. DoD policy permits federal contractors to compensate service members, who are considered federal employees, for survey participation. The next iteration of the HRBS should explore the use of targeted incentives to increase participation among groups with low response rates.

Though the 2018 HRGS took less time to complete than the 2015 version, it was still a lengthy survey that can become tedious for respondents, especially if they have recently answered similar items in other surveys. DoD might consider what overlap there is between the HRBS and other data it already collects. For example, some of the content in the Periodic Health Assessment overlaps with HRBS topics. DoD should consider whether this duplication is necessary, perhaps by first exploring whether the Periodic Health Assessment and the confidential HRBS differ.

An alternative approach would involve the use of modules. Modules might, for example, focus on tobacco use or musculoskeletal injuries. In this approach, not every service member would receive every set of items on the survey but would instead be selected to receive certain modules.

As a supplement to the HRBS, DoD could consider a service member panel to gather information about certain health outcomes and health-related behaviors on a real-time basis. Panels are groups of individuals who agree to participate in a series of surveys for a period of time and are replaced at regular intervals. Panels do require constant maintenance to ensure that they remain representative of the population of interest and are not efficient for assessing the prevalence of rare outcomes. They could, however, reduce the overall scope of the HRBS and, thereby, improve its response rates.

HRBS data provide an overview of health outcomes and health-related behaviors across multiple domains affecting force well-being and readiness. The HRBS faces some challenges in the future—decreasing response rates, overlapping content, and competition for resources—but it remains an important source of data for tracking trends, informing policy, and making programmatic decisions.

The sampling frame used a random sampling strategy stratified by service branch, pay grade, and gender. The overall weighted response rate for the survey was 9.6 percent, yielding a final analytic sample of 17,166 responses. Imputation was used to address missing data, a statistical procedure that uses the available data to predict missing values. To represent the active component population, RAND researchers weighted responses to account for the oversampling of service members in certain strata. In this research brief, point estimates and 95-percent CIs are reported.[2]

This brief is one of eight on the active component; each of the other seven corresponds to a different chapter in the full report. A similar series of eight briefs discusses findings for the reserve component.