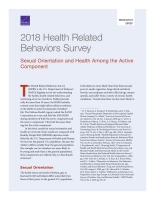 Sexual Orientation and Health Among the Active Component

In this brief, results for sexual orientation and health are reviewed. Some results are compared with Healthy People 2020 (HP2020) objectives established by the U.S. Department of Health and Human Services for the general U.S. population. Because the military differs notably from the general population (for example, service members are more likely to be young and male than is the general population), these comparisons are offered only as a benchmark of interest.

The health issues and needs of lesbian, gay, or bisexual (LGB) individuals differ somewhat from those of their peers. In the general U.S. population, LGB adults are more likely than their heterosexual peers to smoke cigarettes, binge drink and drink heavily, use marijuana and other illicit drugs, misuse opioids, and suffer from a variety of chronic health conditions.[1] Sexual minorities are also more likely to have mental health issues[2] and more likely to access mental health services,[3] though they are less likely to access routine health care.[4] Such disparities among LGB individuals may affect military readiness.

Across all the services, 6.3 percent (CI: 5.8–6.9) of individuals described themselves as LGB. There were few significant differences between the services in this percentage, but the difference between men and women was substantial: 4.1 percent (CI: 3.5–4.5) of men and 17.6 percent (CI: 16.0–19.2) of women were LGB.

Significantly more LGB personnel reported binge drinking (that is, consumption of at least five drinks for men or at least four drinks for women on the same occasion at least once in the past 30 days) and heavy drinking (that is, binge drinking at least once each week during the past 30 days) than non-LGB personnel. Table 1 presents details for these and other substance use questions in the HRBS.

The HRBS asked whether respondents had been told by a physician or health professional during the past 12 months that they had high blood pressure, diabetes, high cholesterol, asthma, back pain, or musculoskeletal injury. For all of these, there were no significant differences between LGB personnel and non-LGB personnel. (For more information on physical health characteristics of the overall force, see the brief on physical health and functional limitations for the active component.)

LGB personnel make up about 6 percent of service members. Though LGB personnel are similar to non-LGB personnel in several health characteristics, they differ on others. Substance use and some risky sexual behaviors are more common among LGB service members than among their non-LGB peers, as were unwanted sexual contact and being physically assaulted.

The greater incidence of some of these problems among the LGB population suggests that DoD and the Coast Guard should include LGB-specific considerations when developing more broadly targeted health promotion efforts, keeping in mind that LGB individuals are part of the military. Addressing LGB health disparities is unlikely to require the development of programs or policies targeted specifically to this group, with only a few exceptions. Indeed, overemphasis on the higher rates of mental and sexual health issues among LGB personnel could increase the stigma associated with LGB status, exacerbating these disparities and marginalizing those affected.

DoD and the Coast Guard should also address the unique mental health needs of LGB personnel. Current and future campaigns to reduce stigma surrounding mental health and service use should include messaging and images relevant to LGB personnel (e.g., feeling isolated, lack of acceptance) and should be tested for acceptability and perceived effectiveness among LGB service members. Mental health service providers should also be sensitive to the unique needs of LGB service members.

Finally, education of health care providers in the Military Health System (MHS) could help reduce sexual health disparities between LGB and non-LGB personnel, including high rates of STI and HIV-risk behavior. It is unclear whether MHS personnel are aware that nearly two-thirds of LGB service members are bisexual. Incorrect assumptions that bisexual service members are heterosexual, gay, or lesbian based on the sex of their current sexual partners could lead to incomplete or incorrect counseling regarding use of condoms and other contraceptives and for STI testing. Providers of women's health services should be aware that one in six of their servicewomen patients identify as LGB. Adaptation of patient screening and counseling protocols and clinic forms may also be appropriate to recognize the presence of LGB personnel among MHS patients.

The sampling frame used a random sampling strategy stratified by service branch, pay grade, and gender. The overall weighted response rate for the survey was 9.6 percent, yielding a final analytic sample of 17,166 responses. Imputation was used to address missing data, a statistical procedure that uses the available data to predict missing values. To represent the active component population, RAND researchers weighted responses to account for the oversampling of service members in certain strata. In this research brief, point estimates and 95-percent CIs are reported.[8]