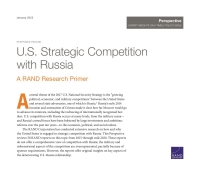 A central theme of the 2017 U.S. National Security Strategy is the "growing political, economic, and military competitions" that the United States faces, including with Russia. Russia's annexation of Crimea made it clear how far Moscow would go to advance its interests, including redrawing internationally recognized borders. This Perspective presents key aspects from past RAND Corporation research on this competition between Russia and the United States.

These findings and themes suggest several topics for further research, such as vulnerabilities in non–North Atlantic Treaty Organization countries located in Russia's periphery; Baltic states' military and civilian capability gaps; deterrence dynamics; the military, political, social, and economic vulnerabilities of U.S. allies and partners; and the fault lines between U.S. adversaries—specifically between Russia and China.